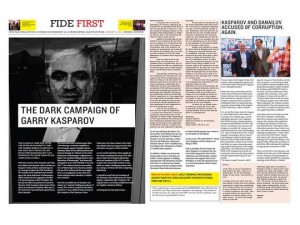 The Fidefirst campaign team has published in one of its daily bulletins a shocking letter by the ECU Executive Director.

The Bulletin #2 revealed the letter that Vladimir Sakotic, ECU Executive Director and close aly of Silvio Danailov, has sent to the Slovenia Chess Federation in an attempt to manipulate their vote in the ECU elections.

The full letter is below. Read also: Montenegro Chess Federation filed a criminal charge against its former President Vladimir Šakotić

I hope you will not mind my addressing you directly regarding the elections in the European Chess Union. I had the opportunity to meet you in person during the opening ceremony of the European Teams Championship in Rogaška Slatina, when I was performing the duties of deputy chief arbiter.

Namely, two months ago, we submitted to your secretary Ms Ana Srebrnič our proposal for co-operation with your valued Federation in the name of the election camp of Mr Danailov.

We exposed our propositions and on May 20 we received the feedback that our offer had been accepted and that the Chess Federation of Slovenia would support Mr Danailov.

From our side, we have also started with the fulfilment of the promises given.

As agreed with Ana, we have prepared two bids for competitions in 2016: European Senior Teams Championship and European School Championship.

Nevertheless, considering that the competition for “the main job” – European Youth U8-18
Championship has been very weak, at the last moment we decided to give this bid as well in the name of Slovenia. I denominate this competition as “main job”, because approximately 2000 individuals (participants and accompanying persons) will participate and potential earning of your Federation would be at least EUR 100,000. Competitors for this competition are Prague (CZE) and Kusadasi (TUR), but if we win the elections, with certain preliminary business agreements, we could guarantee to your Federation to win this competition as well.

Also, we have already ensured for you to get one competition – a friend from Greece will retire the application and Slovenia will be the organizer of Senior Teams Championship in 2016 (approximately 400 participants and accompanying persons), which guarantees the earning to your Federation of EUR 20,000 minimum. A similar competition has been organized in Šibenik this year.

From the above you can conclude that we have already ensured important competitions and financial income for your Federation and that we have kept most of our promises. The reason I am addressing you is the election of your delegate on the Election assembly of European Chess Union:

Namely, your decision to choose Mr Boris Kutin as delegate could directly change your previous decision and our agreement. Although I do not cooperate with Mr Kutin since 2009, I shall not say a single bad word about him. But it is completely unreal to expect from him to support Mr Danailov on the secret voting, being a member of the election camp of Mr Ilyumzhinov and Mr Azmaiparashvili. Mr Kutin met our rival candidate Mr Azmaiparashvili in Sarajevo two days ago (July 14 and 15) and lobbied in his favour, as he does it in Slovenia as well (although with a weaker bid than ours).

I would not like this suggestion to be considered as intervention in the internal affairs of your
Federation, but only as explanation: Mr Kutin as delegate definitely affects our agreement to support Mr Danailov. In this moment, when we have kept practically all our promises, we cannot do anything but to refer to the promise and appeal to keep the written decision as of May 21, according to which Ms Ana Srebrnič will be your delegate.

If after all you choose another option, we cannot and do not want to withdraw the favours we made.

I am looking forward that you will take my letter in consideration. Sincerely,

In a war of statements and bulletins between the teams of two Presidential Candidates, the Sakotic letter is completely sidelined and Kasparov’s team is trying to maintain the discussion of proxies. Their latest remark is connected with the proxy of FYR Macedonia.

A source from FIDE said that the accusations of invalid proxies are totally unfounded: “No federation was complaining that the proxies were wrongly given.”

Another official believes that Garry Kasparov is “preparing the field to withdraw from the elections and continue the legal battle in CAS in order to incur another heavy blow to the FIDE budget”.

On the question about the Sakotic letter, the official is not surprised that there is no reaction: “They have given up on the ECU long time ago. All resources of Kasparov and Danailov are directed to minimize the defeat in FIDE elections. Silvio Danailov’s ticket is on the table every day, offered as a scapegoat in bigger deals.”