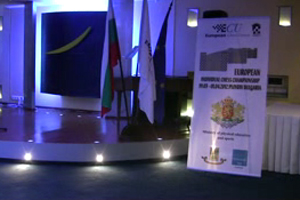 The European Chess Championship is underway in Plovdiv. Round 1 has been played, and logically for an event with close to 300 titled players there are multiple quality games and surprising results.

The champion from last year GM Potkin was held to a draw by IM Alexander Colovic (2436) right at the start of the competition. But that was certainly not the largest of upsets for the day, as GM Mamedyarov, GM Riazantsev, GM Jobava, GM Grachev, GM Navara, GM Efimenko, GM Inarkiev, GM Vallejo are just some of the top players that had the same destiny. In an interesting game IM Evgenja Ovod defeated GM Safarli. Scroll down for all results of round 1.

Replay all games of R1 here

Round 2 will be today with exciting encounters on the top boards. In the battle of the young generation we have GM Nyzhnyk facing GM Anis Giri. The top seeded GM Caruana will play with GM Tamas Banuzs, while other exciting encounters of the day include Laznicka – Ter Sahakyan, Maze – Dreev, Naiditsch – Papin, Chatalbashev – Fressinet, Vachier-Lagrave – Nabaty, Cheparinov – Jankovic, Socko – Grandelius, Mastrovasilis – Howell (see full list of pairings here)