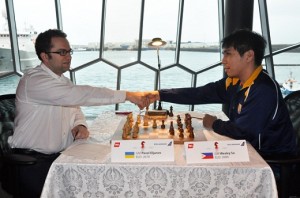 The Reykjavik Open is coming to an end. Pavel Eljanov and Wesley So arrived to the last round as leaders and did not take long to sign a draw – it took them just 3 moves. All we can say about the game is that So had prepared the Grunfeld against 1.d4.

The players decided to go for a share of the first prize instead of risking losing it all. There are six players that might catch up with them.

Ivan Cheparinov is playing against the youngest GM in the world, Wei Yi. The Bulgarian is a rook down, but has two pawns  and the initiative for it. At move 37, he has the opportunity to go for a perpetual check.

Anish Giri is an exchange down against Gawain Jones, and the Englishman has the initiative. The Polish GM Grzegorz Gajewski is a pawn down against Amin Bassem, but there is a lot of play in the position.