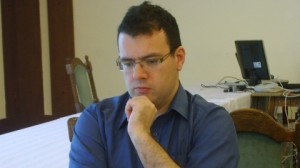 President of ACP GM Emil Sutovsky discussed on Facebook why it is difficult to find the sponsorship for the FIDE World Championship Match 2014.

I am fed up with a hypocrisy. A lot of superficial and insincere attempts to explain – why nobody is willing to put up something like 5 Million USD for Carlsen – Anand.

Chess always was a royal game. Also royal in a sense that it can’t do without a massive government support, that sometimes can be replaced by a wealthy individual.
What we do have – it is a rich chess history, hundreds years old tradition and powerful image. That what chess sells today – not a show, not an action, even not a sport. Wisdom, decision making, planning, concentration, self-improvement.

That explains why all the chess educational programs are so popular – not because they are good, we just use a positive image of chess.

It is also the easiest thing to sell to the governments and charity funds, that’s why all the chess politicians like it so much.

But let’s get back to the Title Match – why there is no single bid to host it? There are several reasons:

1. Such a costly event is not attractive as a commercial investment. Look at the chess history. Look at the recent matches:
Anand-Carlsen in Chennai, conducted under the patronage and actually under a huge picture of Ms J. Jayalalithaa, Honorable Chief Minister of Tamil Nadu (chess is a royal game, remember? Can you imagine such a huge picture of an organizer/sponsor in the West?), and the match Anand – Gefand , that was financed by Mr. Filatov, a billionaire and Gelfand’s good friend? And what about Anand – Topalov, financed by Bulgarian government? It is like that, and it is very unlikely to change in the foreseeable future.

You may recall how difficult it was for Kasparov to find the money for his own matches: at the end of the day, the match with Anand in 1995 saw one of the lowest (if not THE lowest) prize funds in modern times, the match with Shirov did not materialize at all, and it took five years (the biggest break between the matches since the WWII, if we don’t count Fischer’s forfeit in 1975) till the money was found for Kasparov-Kramnik.

Let me remind you, that were the days when nobody was talking about global crisis, and Kasparov was a great charismatic champion… It is just for a simple fact: the event is not attractive for commercial sponsors. Carlsen met with Bill Gates and Mark Zuckerberg , it was in the news everywhere, but we don’t hear about Microsoft or Facebook being interested to sponsor a title match.

Even such a rich country as Norway is not ready to host it.

FIDE has also further limited the options by keeping to pretend to become an Olympic sport one day (which will never happen of course). Hence the tobacco companies (like Dannemann, that sponsored Kramnik-Leko 2004), betting companies (like Unibet, that sponsors Stavanger this year), and many others are out of question. That actually rules out a rather promising part of the market – the companies, that constantly look for some global advertisement.

2. Now, who is guilty? Some say, it is purely Kirsan’s fault. He meets with Hussein-Qadaffi-Assad-aliens…what serious company would like to deal with such a president? Now, that’s true. But only partly true.

Why don’t we hear about serious transnational companies being involved in US chess or some Western countries, that has nothing to do with Kirsan and Co? Why does Intel’s experience in 1994-1995 still remain as a single example of its kind?

Whereas the place like Khanty-Mansiysk, that was hardly familiar to anyone of us before the World Cup 2005, has provided a budget over 40 Million USD for the chess activities in last decade.

Of course, I know, everyone would have preferred to have a chess Mecca in UK or Switzerland. But it only works there, when the event is sponsored by a wealthy chess Maecenas (London Chess Classic) or foreign company, that once again comes from Russia or Azerbaijan (Candidates in London, GP in London, Zug and Geneva, Zurich supertournaments…).

And, please, don’t think it is only about Russian/Azeri nouveau riches – Mr. Sinquefield in US, Mr. Grenke in Germany…
Well, that’s how it works.

The best Olympiads of the modern times were Dubai and Khanty-Mansiysk. And among the worst ones – Torino and Dresden.

Much beloved Wijk-an-Zee tournament is under severe crisis for several years now, whereas the debut Shamkir tournament was one of the most impressive chess events ever…

3.Now, back to the pending match. First of all, the time for potential bidder was very limited, and indeed FIDE should have thought about it.

One can’t rely on assumptions like: “Aronian or Kramnik will win the Candidates, and then Armenia or Russia will easily find the money”.
It is likely to work, but you must have some plan B.
There was no such a plan, and now some hard decisions have to be taken.

Finally, back to chess as a product. We can have an empiric evidence to this statement: let’s try and stage one global event using pay per view system. That will provide you with much more information, than all the polls, where the flattering results of 605 million people playing chess worldwide appear. Let’s see what the reality is, even if it is harsh. Only then we can build some strategy in order to improve the “product”.

Last, but not least, with all the politics involved and justified criticism – let’s not forget, that it is our responsibility to move our beloved game ahead, and refrain from ruining its future for a sake of political gain.