The competition included three events (Moscow Blitz Cup, Cup of Ministry of Construction Industry, Housing and Utilities Sector of Russia (Minstroy), and a team tournament among building organizations), as well as a simultaneous exhibition with GM Alexander Zlochevskij. 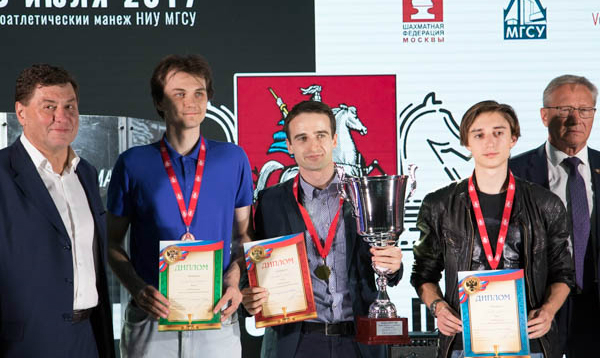 The rating favorite of the Moscow Blitz Cup Sergey Karjakin and a young chess star Misha Osipov took part in the drawing of lots. After the opening ceremony, Anatoly Karpov and Misha Osipov played an exhibition game: the 12th World Champion won.

More than 150 chess players participated in the main event. GM Ernesto Inarkiev won the Cup having scored 8.5 points out of 9. GMs Daniil Dubov, Alexander Morozevich, and IM Vladimir Seliverstov are half a point behind. According to the tie-break, Dubov is second, while Seliverstov is third.

Vladimir Litus won the Cup of Minstroy – 6.5 points our of 7. The second is Zarif Safoev with 5.5 points. Andrey Zlotnik won the bronze medal with 5 points scored.