The Olivier Breisacher Memorial in Biel has a sole leader for the first time after the fifth round. Etienne Bacrot obtained a very important victory over Richard Rapport to put himself at the very top of the standings. The French grandmaster arrived as the first seed and showed his intention to rise again to elite of the game. The live ratings list already put him on the 24th position.

The other two games finished with draws. Earlier co-leader Alexander Moiseenko saved a half point against Maxime Vachier-Lagrave, who missed a big chance to win. Meanwhile, Ian Nepomniachtchi and Ding Liren played the longest game of the day, but also ended up splitting the point.

Etienne Bacrot was once called a child prodigy in the chess world. His quick ascent to the top predicted that he would become a frequent visitor at the strongest tournaments of the world. He participated in a lot of round-robins but did not show the consistency necessary to stay in the top-10, however, he never stopped fighting and remained at the 2700-club. His victory today over Hungarian Richard Rapport might be very important for the destiny of the tournament.

The game started with one of the sharpest lines of the Slav Defense. The players always chose the critical lines and showed their excellent preparation. Bacrot’s queen penetrated black’s camp by herself and created a lot of trouble to the young Hungarian. On move 24, Rapport erred with axb6, when it was necessary to choose Qg4. Bacrot’s advantage increased constantly until his opponent resigned on move 35. 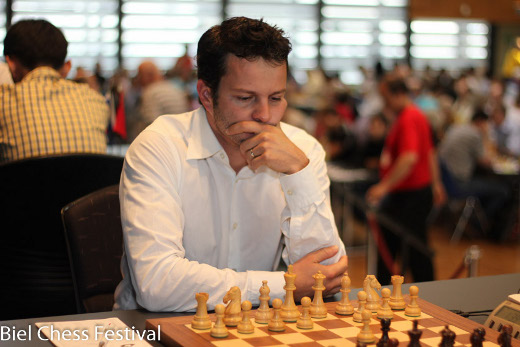 This round almost became a French sweep as Maxime Vachier-Lagrave almost defeated Alexander Moiseenko with white. After his loss against Ding Liren yesterday, the Frenchman played aggressively for a win but could not convert his advantage. So far, he has shown the most enterprising chess in the event, true to his style.

Vachier-Lagrave used the c3 variation of the Sicilian and did not shy away from spoiling his pawn structure in order to go for a direct kingside attack. The strategy worked out fine but the French GM could not follow up with the most energetic lines that gave him a clear advantage. Of course, finding these continuations over the board is extremely difficult and we cannot blame him for not finding them. Moiseenko equalized and the peace treaty was signed on move 40. 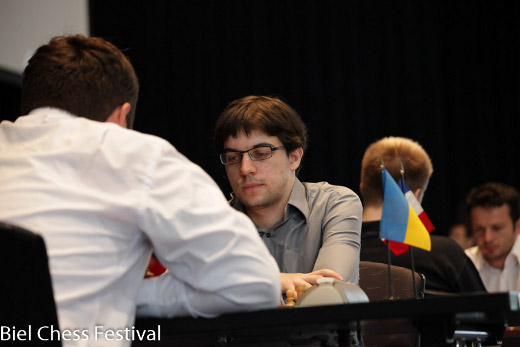 Ding Liren used his pet King’s Indian Defense against Ian Nepomniachtchi. The Chinese went for activity on the kingside without regarding his king’s safety. A very sharp tactical sequence followed where the Russian missed some chances to get a bigger edge. Nepomniachtchi was satisfied with an endgame a pawn up, but could not convert the tiny advantage given the complications set up by his rival. Draw in 66 moves.

The first half of the event is over and, as predicted, we saw very entertaining chess with this lineup. The rest day will not take place tomorrow, as might be expected. Instead, the players will rest after the sixth round, on Sunday. 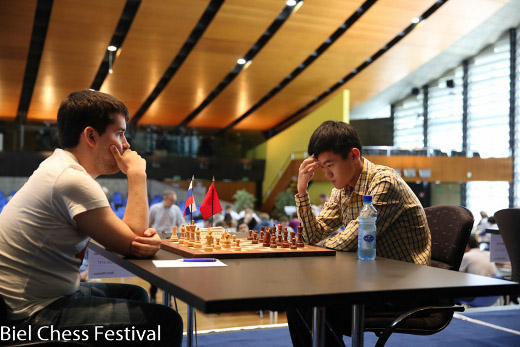