The “ECU Back to Europe” campaign team, which is nominating Zurab Azmaiparashvilli for the post of ECU President, has issued a proposal for the ECU sponsorship and financing in the period 2014-2018.

The proposal includes:
– Sponsorship by the privately owned “JSC Bank of Georgia”
– Cancellation of ECU President stipends and transfer of funds to Chess in Schools and other development programs
– Batumi 2018 Chess Olympiad promotional programs, including chess projects in Europe

Detailed proposal by “ECU Back to Europe” is below 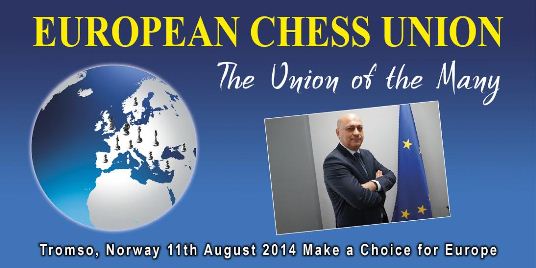 The Bank will financially support the establishment and popularisation of chess in schools, as well as the training of prospective players, coaches and arbiters at chess training centres.

The Bank will be providing financial support for the projects and activities initiated by the European Chess Union.

The ECU sponsors, the Executive Managers of the Bank of Georgia, will be in Tromso to explain all the details. This is our reality and this is our answer to the previous ECU Management that openly admitted during the GA in Warsaw that it was difficult to find sponsors for the European Chess Union in a 4-year period.

B) 144.000 euros from President’ Stipend to ECU Chess in Schools Commission

The Georgian Chess Federation and the Presidential Candidate for the European Chess Union Elections Zurab Azmaipashvilli will propose at the ECU General Assembly in Tromso “to waive the President’s Stipend from the annual ECU budget.

The 144.000 euros to be transferred to the Chess in Schools and other chess development programs, thus enabling ECU to provide additional support to the National Federations.”

Today the ECU budget for the “chess in school programs” is 0. The income of the ECU comes only from players-federations fees. The sponsorship is also on level 0.

Despite all this, the current Treasurer of the ECU revealed that the opinion of “their team” is that the ECU President’s costs (56.000€ annually, out of a total budget of 180.000€) is low for European standards!

Here is the ECU Treasurer’s statement from a recent campaign interview:
..”it is not serious to discuss the President’s stipend because of one more reason – its amount is nothing special compared to the European salaries.”

We want to remind Mr. Silvio Danailov’s Campaign team that this salary is enormously high for countries like Bulgaria or Serbia, where the ECU is based. If they wish to compare Mr. Danailov’s costs with Executive managers in telecommunications, IT, banks or investments companies, then they must also compare the budgets and the revenues of these companies, as well as the financial results of these managers.

An important part of this budget will be allocated to chess projects in Europe.

This additional support for chess projects in Europe is conditional with the bid of Batumi 2018 Chess Olympiad.

All the reasons to support Georgia and Batumi for the 2018 Chess Olympiad.

And this is only a part of our funding plan…