The first round of the 2013 European Chess Club Cup was held today at the Rodos Palace Hotel on Rhodes, Greece.

There were no major surprises in the Open section as the top seeded teams were paired against the lower rated opposition.

David Navara from G-Team Novy Bor won his game relatively quickly and shared the impressions with the press. He said that the opening was a bit unusual, because he doesn’t play it often, but this was a favorite line of his trainer GM V.Jansa. Navara felt a bit uncertain about the whole system, but he outplayed the opponent in the middlegame.

Navara also added that Novy Bor doesn’t have a concrete objective in the Club Cup, they just want to play well. He pointed, however, that he would like a better finish than last year when the team placed 10th. In 2011 Novy Bor won the bronze medal.

The Women section with 11 teams is more closely contested.

Elina Danielian didn’t have problems in overcoming her opponent who unsoundly sacrificed a pawn. Danielian then won another pawn and quickly wrapped up the game.

On the question about status of chess in Armenia, she said that chess is the most popular sport in her country, with football trailing close behind. Chess players are celebrities and people recognize them on the streets. Sometimes she argues with the taxi drivers who don’t want to charge her for a ride.

Vladimir Bykov, captain of Saint-Petersburg, also visited the press center. He clearly stated that the team’s ambition is to win the tournament and that ‘only gold is counting’.

The team of Saint-Petersburg was the Club Cup Champion in 2011 and narrowly missed the title on tiebreak in 2012.

Bykov elaborated the club’s philosophy according to which they first rely on the players from Saint-Petersburg region and then look for reinforcements among the Russian speakers. The only exception was made with Leinier Dominguez, because ‘he is such a nice person’.

There is no women’s team from Saint-Petersburg because, except of Anastasya Bodnaruk, they don’t have good players. The local chess federation is investing in development of the young talents and they hope to have strong female players in near future. 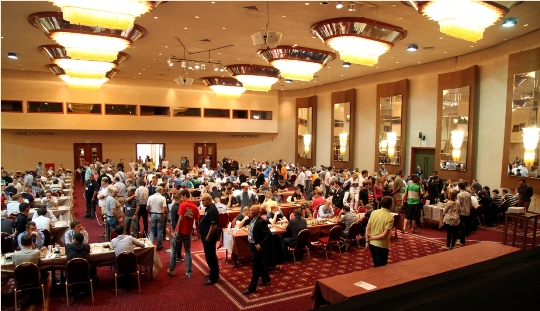