G-Team Novy Bor from Czech Republic stunned the defending champion SOCAR in round six in the Open section of European Club Cup to take over the lead with one round to go.

SOCAR had a good start with Anish Giri’s beautiful victory but in the later stage of the match things went wrong for the team from Azerbaijan. With three wins on the top boards Novy Bor tipped the final score in their favor – 3,5-2,5. 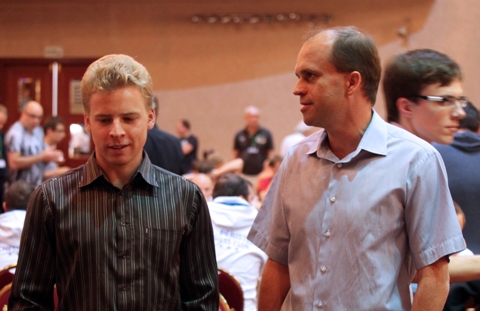 Malachite didn’t have much trouble to defeat S.F. Wirtzfeld by 4-2, but it should be noted that FM Ufuk Tuncer beat the 300-elo points difference to score against Viktor Bologan.

The inspired team of Odlar Yurdu went down 2,5-3,5 against the powerhouse Saint-Petersburg. Nikita Vitiugov and Maxim Matlakov put the Russians ahead, while Rauf Mamedov only reduced the losing margin.

Minsk signed a narrow win against Schachclub MPO Maria Saal thanks to their junior Vladislav Kovalev, while PGMB-Rostov won the Russian derby against Ugra.

After round six G-Team Novy Bor is leading the race with 11 match points, while five teams are sharing the second place with 10 points each – SOCAR, PGMB-Rostov, Malachite, Saint-Petersburg and Minsk.