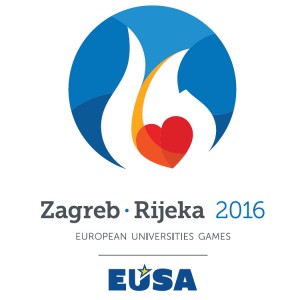 European Chess Universities Games 2016 are going to take place in Zagreb and Rijeka, Croatia in July 2016. European university teams are invited to participate in the 3rd European Universities Games, the largest university sport event in Europe, with a featured chess tournament next year.

The Games will be held in two Croatian cities, the capital Zagreb and the coastal city of Rijeka, encompassing the event slogan Heart Believes – Mind Achieves. Besides chess, European Universities Games will feature competitions for men and women in 20 other sports from Badminton to Water Polo.  Apart of the sports competitions, the Games will be accompanied by the Rector’s Conference, educational side-events, cultural program and various other activities.

Chess competitions feature Open and Women’s tournament, with Blitz as a side event, and will be held in Zagreb. The tournament starts on July 11 with the General Technical Meeting and finishes on July 15 with the finals. The tournaments are as follows:

Only two (2) best results of delegation count for team competition.

Side tournament is non-compulsory for participating teams. Entries to only this tournament are not allowed.
University teams representing any higher educational institute in Europe may register through their national university sports bodies in any of the 45 EUSA-member European countries.

For more information, please visit www.eug2016.com and the site of the European Chess Union.