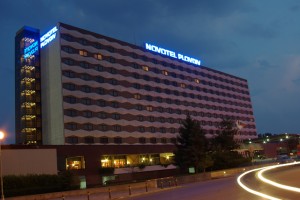 For that reason we see a total of 300 titled players, 175 of which GMs and 70 IMs. Top seeded is GM Fabiano Caruana, who was also one of the main participants at the same venue during the 2008 edition of the competition (photo here). Scroll down for the full list of participants.

Expect live games daily with analysis by Houdini and special photo reports, as well as the most interesting news from the championship on the pages of Chessdom.com.

Note: See photo galleries of EICC 2008 in Plovdiv here and the ECC 2010 here, while detailed view of the venue is at this gallery.

The championship will be organized in 11-round Swiss system in accordance with the ECU Tournament Rules and FIDE Laws of Chess. The rate of play will be 90 minutes for 40 moves plus 30 minutes for the rest of the game with an increment of 30 seconds per move, starting from move one.

A kind of Sofia rules have been implemented as communication between players (the offer of draw) is forbidden until the 40th move has been played.

The prize fund is comparable to the EIWCC women prizes in Turkey, and amounts to 100 000 eur.