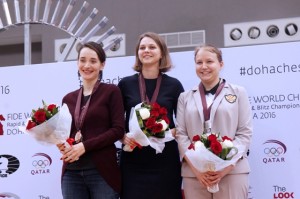 Everything is set for the 18th European Individual Women’s Chess Championship 2017, which will take place in Riga, Latvia, from 10th to 23rd April in the Radisson Blu Latvija Conference & Spa Hotel.

The event will gather the best female chess players from Europe to compete for this prestigious title and the rich prize fund of 75.000 EUR.

The championship will be played according to the Swiss system in 11 rounds, with the time control 90 minutes for 40 moves plus 30 minutes for the rest of the game with an increment of 30 seconds per move, starting from move one. Games will be live daily on Chessdom.com live broadcast section and also for mobile phones at the Chess Arena phone application.

The 18th Individual European Chess Championship for women is qualification event for the next World Women Championship. According to current FIDE regulations and the decision of the ECU Board, 14 players will qualify. More information on the official website of the European Chess Union

The Championship is organized by the Latvian Chess Federation under the auspices of the European Chess Union.

Riga is a city with long lasting chess traditions, great respect for culture, sports and art and we are delighted to welcome the best women players of Europe to compete here for the title of a champion.