The event is open to all European Chess Clubs, but only 32 Teams will be accepted by priority and strength and separated in 4 groups with 8 teams: A, B, C and D. Each of the groups will play 7 rounds robin round tournament and top two teams will qualify for the Finals. The teams consist of 4 players and one reserve player. The time control will be 15 minutes plus 5 seconds of an increment per each move.

Already 10 teams have registered for the event and registration deadline is 4th of December 2020. Registrations may be submitted by all the interested parties through the online entry form.

Total prize fund of the event will be 8.000 euros. 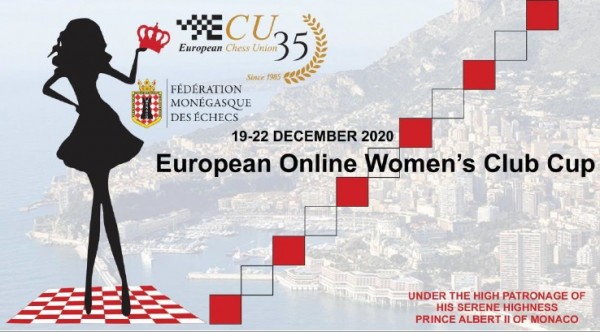 The best ranked team in the Finals will become European Women’s Club Cup Champion 2020 and will receive the “Coupe Princesse Charlene” during the opening ceremony of 2021 European Women’s Club Cup. Additionally to e-medals, top four teams will be awarded with money prizes: 1st place- 2500 EUR, 2nd place – 2000 EUR, 3rd place- 1500 EUR and 4th place – 1000 EUR. The best board players will be awarded with 200 EUR each and with e-medals.

Official regulations of the event can be downloaded here.

The event is organised by ECU and Monte Carlo Chess Club, under the high patronage of his serene highness Prince Albert II of Monaco.