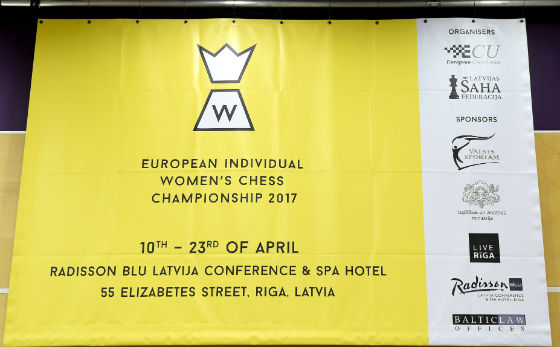 The Championship attracted lots of attention as it is one of the strongest tournaments in history, gathering many former World and European Champions and top female chess players. The event was officially opened on 10th April with nice performance of the music trio and welcome of the tournament officials. The present were addressed by the President of Latvian Chess Federation Aris Ozolins, Woman Grandmaster and Minister of Finance of the Republic of Latvia Dana Reizniece-Ozola, ECU Treasurer Martin Huba, Chief Arbiter Ashot Vardapetyan. The Championship officially started with the first round, which started yesterday at 3.00 pm (Latvian time). There were not many surprises, except of few draws in the top boards. The Muzychuk sisters, Lagno, Dzagnidze, Stefanova, Batsiashvili, Socko, Javakhashvili, Paehtz, etc. secured the victories and are going to the second round as favourites. Top pairings of the 2nd round: