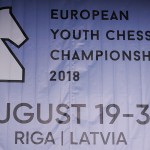 The European Youth Championship is a 9-round Swiss tournament taking place from 20-29 August 2018 in Riga, Latvia. Players compete in six age groups from U8 to U18, with Open and Girls sections. Players receive 90 minutes for the first 40 moves followed by 30 minutes for the rest of the game, with a 30-second increment per move starting from move one.

The players placed 1-3 in the European Youth Chess Championship 2017 will have the personal right to participate in the tournament in the corresponding age-category or a higher age-category if they fullfil the conditions that they have not reached the age of 8,
10, 12, 14, 16 or 18 years, respectively, by January 1st 2018. This privilege may be
exercised once exclusively in the subsequent year following the year of the qualification.

The venue of the tournament will be International Exhibition Centre Kipsala, which is located on Kipsala Island, less than 2km
from Riga Old Town (8 Kipsalas Street, Riga, Latvia).