Georgia and European Chess Union have the honor to invite all ECU member federations to participate in the European Youth Chess Championships, which will take place in Batumi (Black see), Georgia between October the 18th (arrival) and October the 29th (departure).

The championship will be held in 5***** Batumi hotel “Sheraton Batumi” (built in 2010). In case of need second 5***** playing hall of hotel “Intourist Palace” will be at disposal of participants of EYCC 2014. There is 400 meters between “Sheraton” and “Intourist” via famous Batumi Bulvar.

The players placed 1-3 in the previous European Youth Chess Championship will have the personal right to participate in the tournament in the corresponding age-category or a higher age- category under the condition they have not reached the age of 8, 10, 12, 14, 16 or 18 respectively by January 1st 2014.

Each federation can register an unlimited number of extra players. 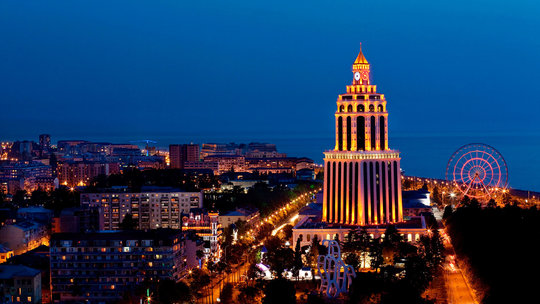 The ECU Tournament Rules shall be followed:
– The tournament will be played according to the Swiss system in 9 rounds.
– The time rate will be 90 minutes for the first 40 moves followed by 30 minutes for the rest of the game with an addition of 30 seconds per move starting from move one.
– Zero-tolerance rule will be applied for each round.
– Players may only agree to a draw after the 40th move has been made by Black. Players violating this rule will be forfeited.

In accordance with the ECU regulations, the entry fee of 65 EUR is required for each invited player and player with a personal right; and 130 EUR for each extra player. According to the ECU regulations, federations are obliged to make the payment of the ECU fee until the end of the second round.

Free accommodation and full board will be provided for invited players, personal right players and also for head of delegations from October 18 (dinner) to October 29, 2014 (breakfast).

The organizer will provide transport services of all participants from Batumi International Airport, Tbilisi international airport, Trabzon (Turkey) airport to Kutaisi hotels on October 18th as well as the departure transfer on October 29th.