Stuart Conquest played his first game in the Euwe Tournament today against the player with the highest rating, 17-year old Robin van Kampen. Due to weather problems in London, Conquest could not arrive on time for the first round.

“I planned to take the ferry from Harwich to Hoek van Holland in the evening and stayed at the airport to get some work done. Then I suddenly heard a last call announcement for a flight to Amsterdam, so I ran to the gate and fortunately they had a seat for me”, Conquest explained. 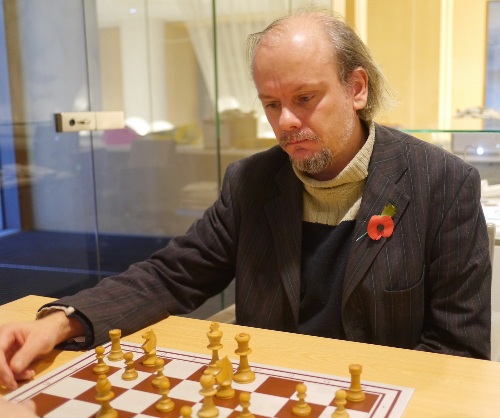 Still, only three games were played today. Fridrik Olafsson already had some problems with his stomach on Monday and he even had to see a doctor on Tuesday. He could not play his game against Pia Cramling today, so this game will be played on the rest day on Thursday, together with Conquest and Arakhamia who still play their first round game.

Let’s take a quick look at the games. Conquest played a typical “English” opening, after 1.d4 d5 he played the move 2.Bg5. A lot of English grandmasters in the eighties and nineties played this highly popular move. If you want to learn something about this opening or 1.d4 Nf6 2.Bg5, check some older games of Hodgson, Adams, Short, Hebden or Norwood.

In this game Conquest played the new move 10.Qa4 and Van Kampen had to solve some small problems. After 24…Nc5?! Conquest missed 25. Rxc5 Bxc5 26.Bxd8 Bxd4 27.Be7 with a better position for white. Both players were in time trouble though, and the young Dutchman could not convert his advantage. He missed the tactical blow 33…Nf4! which would have given him some chances in the endgame. The game ended in a draw after 35 moves. 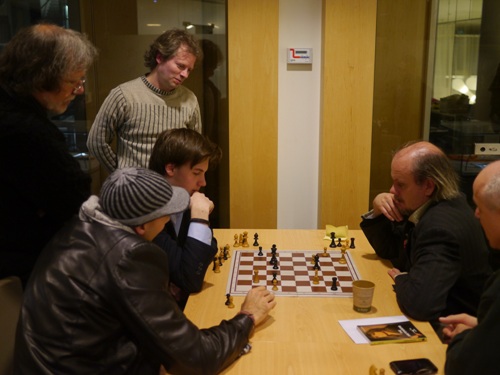 The game Van der Sterren-Peng also ended in a draw. In an English opening, Van der Sterren had a slightly better position, but after 18…a5 black could easily equalize. After 29 moves Van der Sterren offered a draw in a position which was “clearly better for black”, according to kiebitzer GM Dimitri Reinderman in the commentary room.

Monika Socko won a nice game against Kati Arakhamia-Grant. The Scottish champion mishandled the opening completely but somehow managed to get an acceptable position. However, in severe time trouble she lost an important pawn on e6 and the position went downhill pretty fast. Socko had no problem to score the full point. 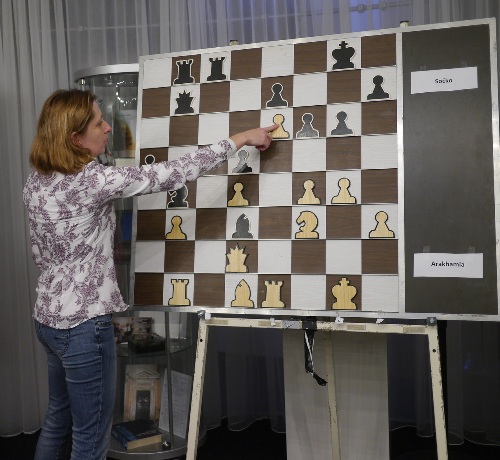 On Wednesday we will see the next games and let’s hope that all players are healthy and well. In group 1 we will see Cramling-van der Sterren and Peng-Olafsson. In group 2 Van Kampen-Arakhamia and Socko-Conquest will be played. The games start at 13.00, live games on www.euwetoernooi.nl.

On Wednesday afternoon 16 November, 14:00-17:30, on the children’s floor of the Public Central library we are organising an afternoon for all children who like chess or would like to know more about it.

Jennifer Shahade arrived in Amsterdam today, and she will give a simul tomorrow. The film “Long live the Queen” will be screened and in the evening there is a lecture by Dr. Jos Uiterwijk. Uiterwijk delivers a lecture on digital developments since Euwe’s time as part of the “Digital Month” series organized by the Amsterdam public library.
Lots of fascinating chess stuff coming up on Wednesday!