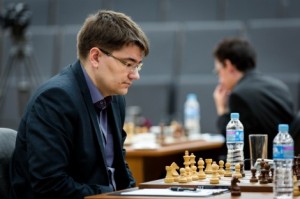 Evgeny Tomashevksy was the last person to join Tata Steel Masters 2016, but will he be first in the final standings?

Tomashevsky was the 14th GM to join this year’s edition, only about a month before the tournament’s start. Tomashevsky ended up being the highest ranked player with a rating below 2750 in the ACP Tournament, thus scooping up the last remaining spot in Wijk aan Zee.

However, earlier in the year, he had already proven his mettle by winning Russian Championship in the summer of 2015. He outperformed every other competitor by at least half a point. In addition, last winter he was convincing in GP Tbilisi, winning the whole event one round in advance.

Watch an interview with the Russian GM

Tomashevsky has not yet participated in Corus / Tata tournaments, making him very much a dark horse that has shown a lot of potential in 2015.