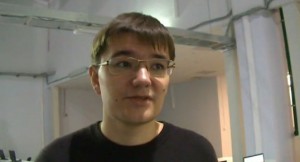 In the 10th round of the FIDE Grand Prix in Tbilisi all games were drawn. This worked perfectly fine for Evgeny Tomashevsky who secured the first place in the tournament with one round to spare.

Tomashevsky has 7,5/10 points, keeping the unbeaten distance of 1,5 points ahead of the nearest follower Dmitry Jakovenko.

Today Tomashevsky played black against his compatriot and winner of the previous Grand Prix in Tashkent – Dmitry Andreikin. Their game was extremely sharp throughout and was the last to finish.

Tomashevsky commented that this was one of the most interesting games he played recently. People were telling him that the tournament was over but he knew that Andreikin is great sportsman and he expected that white would play for a win.

Minister of Sport and Youth Affairs of Georgia, Mr.Levan Kipiani, visited the Grand Prix venue and made the honorary move in the game between Rustam Kasimdzhanov and Baadur Jobava.

Visit the photo gallery and replay the games.

Press conferences will be available in the video gallery. The last round starts two hours earlier, at 13:00 local time.