Fabiano Caruana, Peter Svidler and Sergey Karjakin won their respective games in the 6th round of the FIDE Grand Prix in Khanty-Mansiysk to occupy the top spots on the crosstable.

Sergey Karjakin added another victory after the rest day, inflicting loss to Maxime Vachier-Lagrave, the French Grandmaster’s third in a row.

In the longest game of the day Fabiano Caruana scored a very important victory against Alexander Grischuk. The ending was extremely complicated and therefore abounding with errors, but Sasha was the last to blink.

The remaining three games were drawn.

Fabiano Caruana maintains the lead with 4,5/6 points, while Sergey Karjakin and Peter Svidler follow half a point behind. 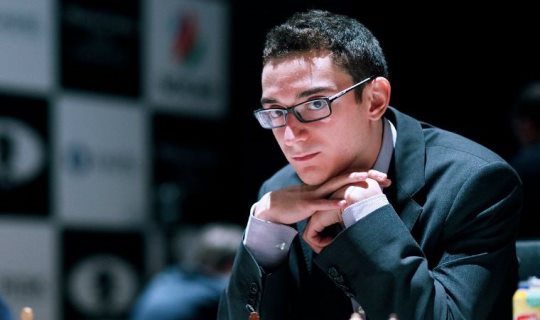 Vladimir Barsky reviews the 6th round of the Grand Prix

Galina Kovaleva, rector of the Ugra Chess Academy, celebrated her birthday on the day of the 6th round. In less than five years her academy became home for chess players from all over the world.

It all started with the 2010 FIDE Congress, then there were World Cup, Women’s World Championship, Candidates Tournament, World Blitz and Rapid Championships, Russian Cup in classical and rapid chess, not to mention hundreds of local events. This unique building is a home for junior chess school, it has a modern computer class, and an excellent library. Staff of the academy welcomes all chess enthusiasts and tirelessly promotes chess.

Galina Kovaleva received praise from the Olympic champion Evgeny Redkin, who is now the Head of the Sports Department of Ugra, and arrived to the tournament to wish her happy birthday. We also with Galina Nikolaevna good health, endless energy, happiness and well-being.

And now let us turn to the events of the round 6, when rich became richer, and poor became poorer.

After futile 7-hour defending yesterday Evgeny Tomashevsky decided to play it safe and avoid risk. Hikaru Nakamura, in turn, made a reasonable conclusion that it is advisable to avoid the King’s Indian against the Grand Prix leader, and did not fianchetto his king’s bishop. The players went for a Catalan, which suited both well: White could maintain slight pressure not worrying about unexpected counterblows, while Black was content with defending a very solid position.

Evgeny selected a relatively rare move order, Hikaru responded with a not very ambitious but reasonable plan. He called for further simplification, accepting a slightly inferior position with the opposite-colored bishops being his insurance in case of emergency.

“If White transferred the bishop to c3, he would have a stable advantage”, explained Tomashevsky at the press-conference. “This position looks unpleasant for Black, however, White has no active plan. Advancing the kingside pawns, for example, it quite risky.”

Nakamura did not let the opponent to regroup his forces easily, and created counterplay on the queenside. The players traded the queens and agreed to a draw on the 30th move in anticipation of the forthcoming rook trade.

Maxime Vachier-Lagrave lost his third straight game, and Sergey Karjakin won for the second time in a row and continues chasing the leader. The young French grandmaster is a very uncompromising player with strong principles; such approach to life has both positive and negative sides. Naturally, Maxime realized that something goes wrong: in the last month only he already lost 26 rating points and fell from 12th to 27th place in live FIDE ratings. Nevertheless, as White he did not try to avoid the fight, and entered one of the most complicated Anti-Berlin lines.

The Frenchman demonstrated a novelty – 12.а3. Karjakin could not recall whether he analyzed this move (“even if I did, it was a long time ago”). Vachier-Lagrave played very aggressively, pushing pawn in the center and on the queenside. Karjakin admitted that he nearly walked into a trap on the 19th move: “I planned 19…Nf4 in advance, but luckily spotted 20.Nd6! This is why I had to stick to 19…b5.”

In a couple more moves the Frenchman lost the thread of the game. His 21st move was already a mistake. “It is possible I have analyzed the position after 21.Rc1, but I did not remember it at all, and did not know what to do!”, complained Vachier-Lagrave. He banked on the 28.е6 break, but after the unexpected 28…f6 White had neither a pawn, nor an attack.

Soon Karjakin brought his passed pawn to с2 and started dealing with the opponent’s weak pawns. White resigned on the move 38.

Baadur Jobava is famous for his original opening ideas. Other players who approached Jobava’s table today, looked puzzled and then started to smile: he began the game with 1.b3, and put a pawn on h3 on the 4th move.

“I prepared this variation specially for the Grand Prix”, explained Baadur at the press-conference. “It is not as stupid as it may look!”

Soon the players created a sharp, double-edged position with the kings castled on opposite flanks. White constructed a strong queen+bishop battery, while Black opened the a-file and prepared for the counterattack. Jobava could not ignore the opponent’s threats and offered to trade queens. However, the ending after the queen exchange was still quite sharp.

“I was happy about my position after 22…Nb5, because it gave me counterplay on the queenside, but I was a couple of tempi short to develop something serious, and was too short on time to calculate all those complicated variations”, said Jakovenko.

Jobava skilfully maintained the tension, and used the opponent’s inaccuracy to regain the initiative. The position, however, remained about equal, even after Jakovenko committed a one-move blunder – fortunately, it happened only in his calculations, not on the board. After that incident Dmitry regained his composure, calculated everything carefully, and forced a draw with a timely exchange sacrifice.

Boris Gelfand offered Lenier Dominguez to continue the opening dispute in the variation that occurred yesterday in Giri-Dominguez. The Cuban accepted the challenge, but altered his setup slightly. A critical position occurred on the 16th move. Initially Gelfand planned to play 16.Bg5 in order to weaken dark squares in the enemy camp, but rejected it because of 16…Nxe5! 17.Rxe5 f6 with great complications. “There are many options here. Black’s position looked dangerous, but I did not find how to break it”, said Gelfand after the game.

Dominguez found a very strong reply – 18…b5! This pawn sacrifice allowed him to solve the problem of developing the queenside and gave excellent compensation for a minimal material loss. A couple of moves later Gelfand exchanged his queen for two rooks, considering the resulting position very promising for him: “If I could transfer the bishop to f1 in time, my position would be simply winning. However, White was short on tempi to achieve that. And then I totally lost control in the terrible time trouble.”

Dominguez created dangerous threats on the kingside and forced White to weaken his long diagonal. 37…Qc8!, as Lenier pointed out at the press-conference, could give Black a decisive advantage. “However, here I noticed that I barely have 10 second for the remaining four moves, so I just played out some random moves”, said Dominguez. This allowed White to force a trade of Black’s dangerous light-squared bishop. White’s position still looked suspicious, but after the time control passed, Gelfand found a narrow path to a draw.

“It’s a new line, there are about four games in the database, but of course Anish was prepared, and probably better prepared than I was”, said Peter Svidler. The 7-time Russian champion also said that Black could equalize the game by 15…а6, but his young opponent did not want to play with a backward pawn on c6 and opted for an isolated pawn instead. “I am sure it was absolutely fine for Black, but playing White was easier. I did not see a good plan for me”, admitted Anish Giri.

In the subsequent maneuvering phase White outplayed the opponent and could deliver a nice tactical blow on the 34th move, obtaining a large advantage. “Frankly I have no excuse for missing it. Any knight takes on e6, then Qb6, and the game finishes sort of immediately. I thought the move I played is also completely winning, but I blundered 37…b5” (Svidler).

The position simplified, which was not in White’s favor, as his extra pawn was safely blocked. The only chance for him was to carry out pawn breaks on the kingside. Svidler went for it, and the game transposed to a rook ending with two white pawns against one black pawn.

“I thought it was a draw on the spot, and when I realized that Black still has problems, I got completely lost. This is one of the worst games I ever played”, said Giri. However, let us not diminish Svidler’s effort, who consistently looked for chances and handled the innocent-looking rook ending, which was actually quite deep, in a very refined way.

“I made a new move, and after a very first reply I could not remember what to do and started to fight for equality”, said Grischuk, clearly very upset about the opening phase. His opponent suggested 11.Bg3 was a mistake, and White should have placed the bishop to e5. In any case, the main thing is that White failed to equalize out of the opening.

“I was not in time to take on d4 with a pawn. Therefore I took with the queen and started to fight for equality.” (Grischuk) He did well for a while, defending an inferior position tenaciously. However, after the first time control Grischuk selected a dubious plan, and got into terrible time trouble with just 46 seconds for 7 moves without an increment. He did not lose on time, but could well lose on the board had Caruana found the strongest reply on the move 60. However, that time the Italian let his opponent off the hook.

Still, White’s position remained unpleasant, and the Russian once again got under the time pressure. A draw was within the reach, but after seven hours of play Alexander made the final mistake, and allowed Black’s passed pawn to slip through his fingers…