Soon after announcing that it had secured the TV rights for the FIDE World Chess Championship Match Carlsen-Anand, Norwegian state broadcaster NRK.no got in touch with several experts to ask their opinion.

Magnus Carlsen’s former trainer GM Simen Agdestein believes that – “It is more difficult for Carlsen this time. Anand is the challenger and not under the same pressure as last year.”

“It is liberating for Anand to play away from India. He is better prepared too. I think it will be even” – GM Leif Johannessen said for NRK.

Famous commentator IM Torstein Bae stated – “It is likely to be a more even match this year. Anand worked very hard and has a different confidence this time. But Magnus is still the best player and favorite in the match.” 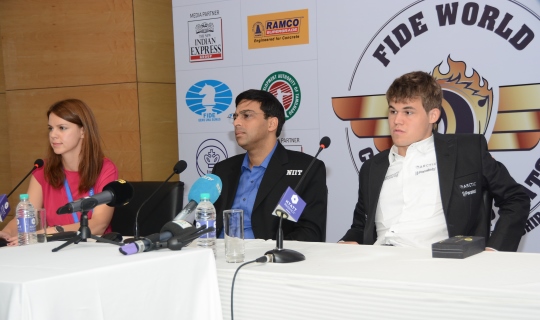 VG.no, partnering with NRK in live transmission, will have Hans Olav Lahlum and Mads Andersen in the studio during the Carlsen-Anand broadcast.

Also on Twitter, user @p2kchess posted a very nice photo of the young Carlsen playing against Viswanathan Anand at the Rapid tournament in Leon in 2005. 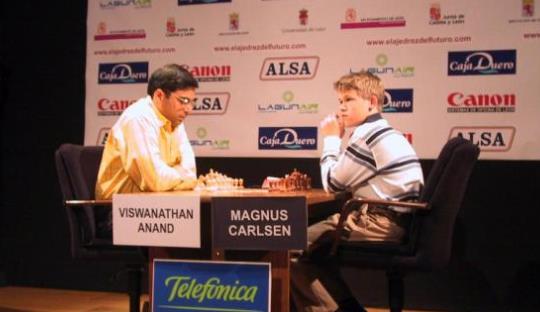 The 44-year-old Indian superstar surprised many by winning the candidates’ tournament earlier this year, and he has just scored another fine result by dominating the 2014 Bilbao Masters Final, a Category 21 four-GM double round robin that concluded just last week. Even a last-round loss to Armenian GM Levon Aronian couldn’t derail Anand, who clinched the event with a round to go.

Couple that with some un-Magnus-like recent results — two losses in the August Olympiad and a distant second-place finish to Italian GM Fabiano Caruana in the recent Sinquefield Cup in St. Louis — and Carlsen may be in for a tougher fight to defend his crown than he faced when he won it.

Carlsen is reportedly preparing for the match with his chief trainer GM Peter Heine Nielsen, but he also finds time for off-board activities. TV 2 informed that Carlsen played second half in the football match that secured his friends from Fremad Famagusta promotion to the fifth division.

In another report, TV 2 quotes Carlsen as saying – “The World Chess Championship match was a great experience, and I want to relive it”

Prior to the match in Sochi, Anand is expected to take part in the 1/8 finals of the Corsican Circuit, a rapid event that will take place on 18-22nd October.