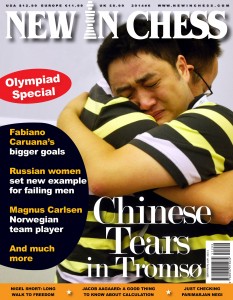 Fabiano Caruana has had an extremely successful summer. After is his tournament victory in Dordtmund he gave an exclusive interview that is published in the latest issue of New In Chess. Caruana explains the role of his trainer Vladimir Chuchelov, how they prepare for his opponents and what sort of positions he likes to get. A lot of work has been put into opening preparation. ,,We’ve gained a bit of a reputation’’, Caruana says. ,,People realize that it’s not easy to face us in the opening.’’

Remarkably, Caruana confesses which is the “one area that I should work on”. To find out, you can buy the magazine. It is available in all chess shops and you can download the digital edition for iPad in iTunes or for Android tablets in the Google Play Store

New In Chess 2014#6 has a 40-page report on the Olympiad in Tromso, and lots of other great stuff.

• Fabiano Caruana: the secret of my success

• How the Chinese men and the Russian women clinched their victories

• Annotations by Caruana, Vachier-Lagrave, Giri, Timman, Kasimdzhanov, Ni Hua, Shankland, and many others

• Nigel Short: why did so many European delegates let Garry down?

• When Magnus Carlsen gets extremely tired

• MVL: how to beat Anish Giri

• Parimarjan Negi on his favourite player

Alsoavailable for the iPad and Android tablets!