Italian champion Fabiano Caruana defeated Vladimir Kramnik in the penultimate round of the Tal Memorial to move into the sole lead with one game to go.

Kramnik, who was the joint leader after the 6th round, suffered two consecutive losses with black pieces and slipped down in the standings.

The game was fairly balanced, with white having an extra pawn and black compensating with the active pieces. Caruana tactfully probed the opponent’s weak points and achieved some edge before the first time control.

Suddenly, Kramnik leaped ahead with the knight, missing that white can simply take it and emerge with two minor pieces for the rook.

The advantage was still not decisive, with white likely to face technical difficulties, but Kramnik was probably disgusted with the blunder and promptly resigned.

This morning there were five players in the joint lead but Caruana was the only to win from this group and thus enter the final round half a point ahead of the opposition.

Speaking of the sequences, Alexander Morozevich lost his third game in a row, while Luke McShane scored the second consecutive victory.

From a relatively quiet Chebanenko Slav opening, McShane found an original plan, and instead of playing on the black’s “natural” queenside, he set on opening the g-file and attacking the white monarch.

Morozevich, quite contrary from the cold-blooded and accurate defence in the earlier victory against Aronian, impatiently pushed to open the center and punish black for his adventures.

McShane immediately sacrificed the exchange and achieved wonderful play with the minor pieces. Another blunder from Morozevich and black ripped the pawn shelter around the white king forcing a resignation a couple of moves later. 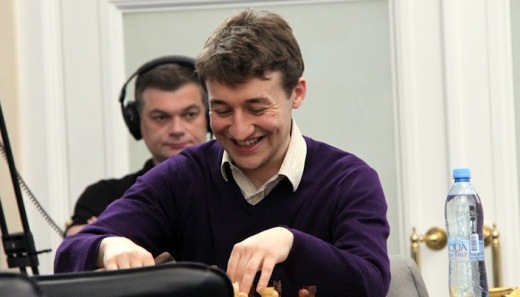 In the other games Alexander Grischuk won against Hikaru Nakamura, while Teimour Radjabov and Levon Aronian split the point after a very exciting and original game.

In the longest game of the day, Magnus Carlsen and Evgeny Tomashevsky drew after 85 moves.