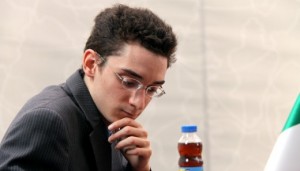 Three rounds, three wins and a commanding lead: Grandmaster Fabiano Caruana has been unstopped in the 2014 Sinquefield Cup.

The “lowest” rated players in the field, GMs Veselin Topalov and Maxime Vachier-Lagrave – officially, the eighth and ninth-best players on earth – earned full points in Friday’s third round, while the top-two players on the globe suffered defeat.

GMs Magnus Carlsen and Levon Aronian entered the weekend with a loss each, sending them backward in a strongest-ever field that features two world champions, current and former – and both in the cellar.

Showing no effects to the magnitude is Caruana, who knocked off the current champion Carlsen on Friday to take a 1.5-point lead over the field after three perfect rounds.

The 2014 Sinquefield Cup is a 10-round, double round robin tournament that runs through September 7, with each round beginning daily at 2:00 p.m. local time. Monday, September 1 will be a rest day.

The 2014 player field features six of the top-ten players in the world and averages a historical 2802 rating. The winner will take home $100,000.