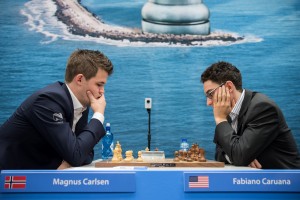 Caruana conceded second draw in Wijk Aan Zee. After the one with Carlsen in R2, he missed a win vs Anish Giri today. Yet the Italian / US player is sole leader of Tata Steel

Fabiano Caruana is the sole leader of the 2016 Tata Steel tournament. After four rounds, the Italian / US grandmaster has collected 3,0/4. This is half a point more than the chasing pack – Wesley So, Sergey Karjakin, Yifan Hou, Ding Liren, and Pavel Eljanov.

The lucky escape of Anish Giri does not improve much the situation for the local players. Giri is shared 13th with 1,5/4, while Van Wely lost his game today against Eljanov and is last with 1,0/4.

The top seeded player in the event – World Champion Magnus Carlsen – shook hands with Shakhryar Mamedyarov for a fourth consecutive draw. The Norwegian is currently 7th with 2,0/4, the same points as Chinese prodigy Wei Yi.

Replay round 4 with computer analysis

In the Challengers section GM Alexei Dreev continues his domination. After a victory with black vs GM Mikhail Antipov, Dreev continues with perfect score 4,0/4. Replay all games of the round here