The 2012 Sparkassen Chess-Meeting took place on 13th-22nd July 2012, in Dortmund, Germany. Ten players competed in the round robin tournament.

The top of the crosstable was crowded as five players entered the last round with equal 5 points. Fabiano Caruana (20 years old) and Sergey Karjakin (22 years), succeeded in winning in the 9th round to jointly finish on 6.0 points.

Caruana is awarded the winner’s trophy thanks to the better additional criteria (greater number of wins). This fine victory did justice to the young Italian who was seen as the winner of the recent Tal Memorial, but the unfortunate last round loss prevented him from taking the honours.

It should be noted that Caruana defeated the super-solid Vladimir Kramnik twice in the short time frame (Tal Memorial and Dortmund, both in the 8th round).

Four out of five German national players that took the gold medal at the 2011 European Team Chess Championship participated. Only Arkadij Naiditsch was in competition for the top ranking, eventually sharing the 3rd place behind the winners. 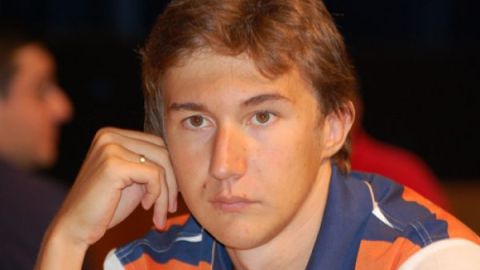