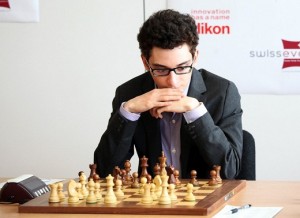 Fabiano Caruana started 2015 with a good showing in the Grenke Chess Classic, though ultimately finishing in fourth place. Later on, he faced the Zurich Chess Challenge, a tournament with a combination of Rapid, Classic and Blitz game types, where he did very well in Blitz, placing second, but ended up 5th in the overall score. Next up for him was the Shamkir Chess Tournament, where he finished forth, once again in the shadow of Carlsen. He was not convincing in the Sinquefield Cup, where he came in 8th.

Caruana’s first major success last year was the Dortmund Sparkassen Meeting 2015. He was triumphant with 5.5 points in 7 games and stringing together 5 victories in a row. Another of his successes is Khanty Mansiysk GP, where he and Nakamura drew their final games and managed to qualify for the 2016 Candidates matches.

Caruana has participated in the Corus/Tata Steel chess series a total of 5 times. This will be his sixth appearance on the tournament and 5th consecutive one. His best performance was during the 2014 edition, where he got the bronze.