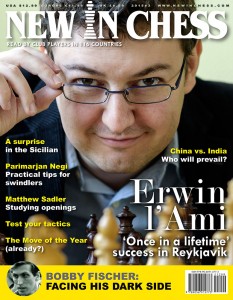 New In Chess magazine 2015#3, that was published this week, has a 16-page article about Bobby Fischer. Editor-in-chief Dirk Jan ten Geuzendam examines a new book about the American World Champion.

Bobby Fischer, Triumph and Despair has 786 pages filled with an unsettling collection of letters, diaries and private notes from the Fischer library of collector David DeLucia. The book may not be a pleasant read, writes Ten Geuzendam, but there can be no denying that it includes a wealth of information that is historically important. That is, if you are interested in the persona of perhaps the most celebrated of the chess World Champions.

Besides memories of Fischer’s greatest feats, the book contains a harrowing amount of evidence of an inconvenient truth: that the 11th World Champion was mentally ill for the better part of his life. Even to this day, many Fischer fans and people that had known him personally are looking for ways to excuse his outrageous behaviour or gloss over his dark side. In doing so, they have been doing Bobby Fischer a great disservice. Only by accepting his illness as a fact can we forgive his virulent anti-Semitism, his raving paranoia and other delusions, and embrace the chess genius, one of the greatest and most inspiring champions our game has ever seen.

In the book, there is an awful lot to enjoy about Fischer the chess player too. ‘We can only do so once we have freed ourselves of the burden of ignoring or finding excuses for everything his disorder led him to do or say’, writes Ten Geuzendam. ‘There is no need for this. He does not have to be blamed for anything. Once you’ve come to that conclusion, you can fully immerse yourself in his fabulous chess again.’

One of the documents in Triumph and Despair, contains hand-written notes by Fischer to a number of games from the blitz tournament in Herceg Novi in 1970. It shows the beauty and brilliance of his chess, separated from the individual. Scoring an unbelievable 19 points from 22 games, Fischer trounced a world-class field, finishing 4½(!) points ahead of Mikhail Tal. Fischer wrote the notes for a Yugoslav book on the tournament. They have never appeared in an English or American book or magazine before.

Mikhail Tal commented on Fischer’s performance in Herceg Novi: ‘His playing is of the same kind as in tournament games; everything is simple, follows a simple pattern, logical, and without any spectacular effects. He makes his moves quickly and practically without errors. Throughout the tournament I think he did not leave a single pawn en prise, while all the others managed to lose a whole set of pieces in this way. Fischer’s result is very, very impressive… Despite all his whims, intransigence and eccentricity, Fischer loves chess, is fanatically devoted to the game, and is not afraid of anyone.’

In the magazine are two games by Fischer, his wins against Kortchnoi and Tal. For this website we have transcribed the notes to his game against Hort.

To read more about Fischer, you can order the (digital edition of) New In Chess magazine via its website.