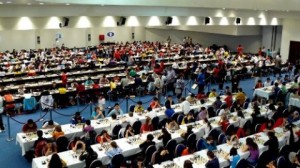 The World Amateur Chess Championship is off to an exciting start in Porto Carras, Greece. With more than 150 players from 30 countries, the event began with only 13 draws as most games ended in decisive results.
However, as there is no clear favorite in the event and ratings are similar, the top seeded player was one of the few who was held to a draw.