On Thursday January 19th, FIDE President Kirsan Ilyumzhinov met with the newly elected ACP President GM Emil Sutovsky. The meeting took place after preliminary talks between GM E. Sutovsky, FIDE Deputy President Mr. G. Makropoulos and FIDE Vice President Mr. I. Gelfer (all members of the FIDE Commission for the Olympiads and World Championships), in which several issues concerning the relationships between FIDE and the ACP were discussed.

Both parties are striving for a constant dialogue and cooperation regarding all issues, which concern the professional chess.

In this regard, the following points were agreed upon:

1. The ACP will be actively involved in the decision-making process within FIDE – The ACP President or his representative will be invited to all FIDE Presidential Board meetings. Additionally, the ACP will be represented in the following commissions of FIDE: World Championships and Olympiads, Modernization, Qualification, Ethics and Rules.

2. The ACP, having a comprehensive information about all major events in the chess world, will build a Calendar for all official events. This Calendar shall be approved by FIDE.

3. The ACP will participate in the process of choosing arbiters for the Olympiads.The shortlist of International Arbiters – members of the ACP will be submitted, and FIDE will appoint 10 arbiters from this list.

4. The ACP gets the right to organize 2012 ACP World Rapid Cup, 2012 Women’s World Rapid Championship and 2012 World Internet Championships/Cup. In case the ACP intends to organize such events in the future, they will have to get an approval from FIDE for using the “World” title.

5. One of the FIDE President nominees for the 2013 World Cup will be the highest ranked player of the ACP Tour 2012, who is not qualified by other way (Elo, Continentals, etc…)

In addition, the question of introducing new Grandmaster title was discussed, and the ACP will conduct a survey in this regard. 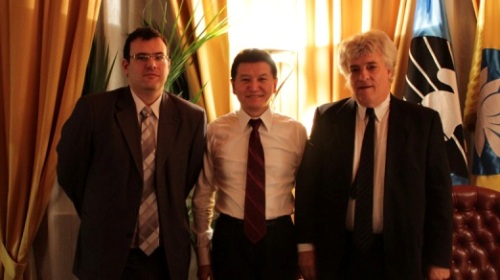