This was at the end of a very successful meeting at the Ministry of Education with, the Ministry regarding chess as an important tool in their new education policy.

Mr. Freeman thanked the President of the Trinidad and Tobago Chess Federation, Russell Smith and his colleagues on the Board for all the hard work that had done to ensure the success of this project.

Later, together with Allan Herbert, FIDE Development Commission Chairman, and Russell Smith, he then made a speech at the Trinidad and Tobago University to potential teachers of the Chess in Schools program. 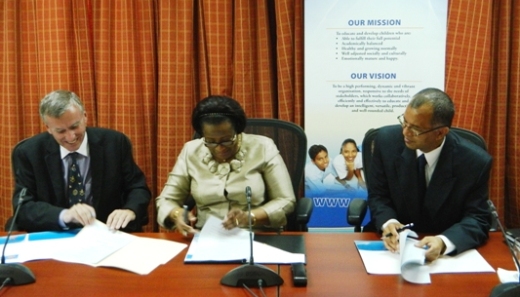 FIDE and Trinidad and Tobago signed CIS Memo of Understanding

Freeman spoke about the mind-improving benefits of chess and provoked a peal of laughter from his largely female audience when he expressed the hope that their involvement in the programme could result in turning around the traditional gender imbalance existing in the sport.

“Boys are better at chess, and we don’t know why,” he said. “Maybe Trinidad and Tobago will be able to change this pattern and show that girls are better.”

Allan Herbert gave a brief history of the “ancient and fascinating” game which he said dated back to the seventh century in Asia.

He recalled that chess was played on an organised basis in the West Indies for more than a century as the first inter-colonial championship involving T&T, Barbados and Guyana was held in 1898.

It seems important for this programme to succeed as its success would provide FIDE with the added incentive to expand its programme to other countries, especially small developing states such as ours.

Freeman told DR, in fact, that so far FIDE had initiated the plan in just two other countries, Slovenia and Slovakia.

More details in the Carl Jacobs’s article for Guardian Online