The FIDE General Assembly will start on Monday 11th August at 9am. Already in the first session FIDE elections will take place, as a culmination of the campaign that started in Tallinn last year.

In the last day before the elections, both campaigns have issued open letters that address the election procedures.

An Open Letter to the Ilyumzhinov Presidential Ticket, the Tromsø Organizing Committee, and the FIDE Delegates

Since the beginning of my campaign for the FIDE presidency I have strived for greater transparency and fairness in every aspect of the election process. The incumbents have many natural advantages and also many opportunities to abuse official FIDE powers for advantage.

Today I proposed to the Ilyumzhinov ticket a short set of detailed procedures that would guarantee a fair and confidential election for FIDE President on Monday. These proposals are in full compliance with the FIDE rules. They also embody their spirit: to ensure an impartial election where the administrative resources of the incumbents may not be used to entrench them forever, and the best ticket with the best ideas wins.

Our proposals are in no way controversial and they would apply equally to both sides (they are attached so you can judge for yourself). In fact, they are widespread best practices in democratic societies and should present no discomfort to any party seeking a truly fair contest. We tried in good faith for several days to get the Ilyumzhinov ticket to speak with us about a compromise on election procedures. This afternoon, when we put detailed proposals before them, they refused even to look at them, without offering an explanation.

Open Reply by Kirsan Ilyumzhinov to the Open Letter of Garry Kasparov:

In the hours leading up to the FIDE Presidential Election, Garry Kasparov is in panic mode. Painfully aware of his imminent defeat, unable to resign and just go home, he must play to mate. All he can do at the moment is muddy the waters and try to manufacture explanations for his financial backers: he is paying a team of lawyers from one of the most expensive firms in the world (>$725/hour/lawyer) to create fog and confusion. These are the same lawyers from the same New York law firm — White and Case — who with Kasparov have cost FIDE $2m over the last four years (their cases lost, the money wasted); expensive lawyers are the principal instruments of the Kasparov Style in this endgame.

Since Friday, we have been bombarded with letters from these lawyers. The first had 11 points, the second 25 points, the third 23 points. Most of these points are revisiting questions that the very same lawyers already proposed, presented to the General Assembly – and which were accepted by FIDE – in Istanbul two years ago. Not only is it late in the day to be discussing such issues, but as a candidate I do not have the authority to change rules that were decided on and approved by the General Assembly.

White and Case’s lead lawyer, Ank Santens and the Kasparov Campaign Representative, Jøran Aulin-Jansson (who also happens to be one of the Olympiad Organizers), met with Mr. Makropoulos in the afternoon of August 9th to discuss the 11-point proposal letter. When she suddenly pulled a 25-point proposal out of her purse, a stunned Makropoulos protested that as no one had seen this document they must return to the 11-point letter.

Arriving at point 3 of the 11-point letter (a rewriting of the rules for Scrutineers) the White and Case lawyer offered a deal to pre-arrange the 3 members of the Scrutineer Committee. This is in direct violation of the democratic procedures described in our statutes and regulations. Mr Makropoulos reminded her that for many months a great number of people from many countries (including her) had worked to finalize the current regulations and he felt it would be anti-democratic to make changes now at the last minute without consulting the General Assembly. He also reminded the lawyer that she and Kasparov not only supported the regulations in Istanbul, but that she herself presented the regulations to the Assembly and urged their approval.

With nowhere to turn, Mrs Santens then insisted to stop the discussion based on the 11-point letter and to start discussing the 25-point letter. When Mr Makropoulos naturally refused to address a document that he had never seen, the lawyer abruptly got up and left the meeting, clearly following an exit strategy suggested by her client Garry Kasparov.

Later that evening, the third 23-point letter was released. In his declarations of transparency, Kasparov neglects to mention the multiple versions of his proposal letters, the meeting with Makropoulos and the erratic behavior of his lawyer and his Campaign Representative, Jøran Aulin-Jansson. 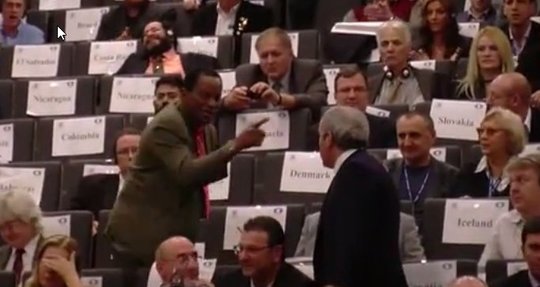 Along with the fog and confusion his lawyers are generating, his PR department (probably less well-paid) is manufacturing crises, confusion and conflict. Please beware of the distortions and omissions in his communications. Kasparov’s supposed transparency is getting more and more cloudy and dark as his sun sets.

I call on Garry Kasparov to respect, even in the last moment of this campaign, the statutes and regulations of FIDE, follow its democratic procedures and to stop provoking the up-to-now peaceful atmosphere of these elections.

I call on the Tromsø Organising Committee to discourage, rather than encourage, the cheap and disruptive last-minute political tactics of Garry Kasparov.

I call on all FIDE Delegates to to be vigilant and protect the General Assembly from a repetition of the anti-democratic and provocative behaviour that Garry Kasparov demonstrated in Khanty-Mansiysk. “Garry, respect the house!” should again be our watchword against the audacity and impulsiveness of the former world champion.

As a last note, in order to avoid giving the wrong impression, I would like to remind the lawyers that Mrs. Carol Jarecki has been among my nominations to be a Scrutineer in all of our recent elections.