Kirsan Ilyumzhinov is re-elected for another term! Vote count 110-61!

The FIDE General Assembly started on 11th August at 9am at the Tromso University.

The Assembly started with obituaries and a minute of silence in the memory of departed Grandmasters, organizers and arbiters.

Anthems of Norway and FIDE were played and then followed the report of Ms Margaret Murphy, Chairperson of the Electoral Commission.

After the roll call to establish the quorum, the Assembly proceeded with the election of Scrutineers.

El Gendy, Jarecki and Klerides were appointed by majority of the votes.

FIDE President Kirsan Ilyumzhinov presented his report. Ilyumzhinov said that Baku and Tashkent will hold two FIDE Grand Prix events this year. Two more to be announced for next year.

Ali Nihat Yazici asked about legal fees that were incurred by Kasparov supporters after previous elections and who is going to pay 1 million back.

Ian Wilkinson urged the delegates not to ask questions about AGON or Leong contract, because the matter is with the FIDE Ethics Commission. 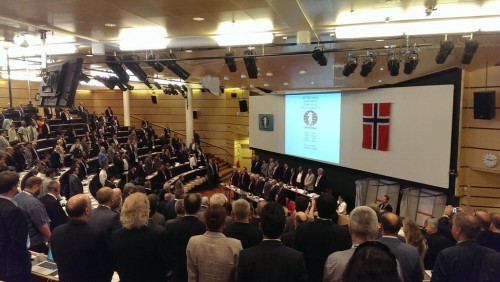 Nigel Freeman at the end of his mandate as FIDE Treasurer thanked all federations and officials for the cooperation throughout the years.

Next, Graham Boxall, Chairman of the Verification Commission presented his report.

After the lunch break, scrutineers El Gendy, Jarecki and Klerides took the floor and FIDE Presidential Board members moved to the audience. Roll call started.

174 federations were present to vote.

Garry Kasparov was first to present his ticket and program.

Next the incumbent Kirsan Ilyumzhinov presented his ticket and program.

After the presentations of the candidates, Carol Jarecki explained the voting procedures and started to hand out the ballots.