Fabiano Caruana and Boris Gelfand moved into joint lead after defeating Leinier Dominguez and Teimour Radjabov, respectively, in the penultimate round of the FIDE Grand Prix in Baku.

The games Nakamura-Mamedyarov and Karjakin-Svidler were both drawn by perpetual check. 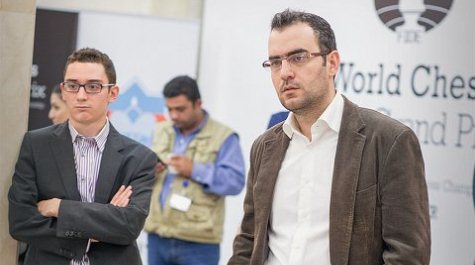 The Slav Exchange line is back in fashion, after the effort of many top rated Grandmasters, including Nakamura.

After the regular development of the pieces, black succeeded in anchoring the knight on c4. The doubled g-pawn was pushed as a battering ram against white castle.

White king was left on the open field but black couldn’t find anything better than the perpetual check.

The players arrived to this round haunted by the poor form in recent games. Dominguez had two consecutive losses, while Caruana lost in two of last three rounds.

A supposedly quiet English Opening didn’t prevent Caruana from seeking an initiative at the early stage of the game.

Black traded his bishops, expanded in the center and broke white’s queenside structure.

Opening the f-file proved to be a risky affair for white who suddenly fell under tremendous attack.

Caruana thereafter needed only a couple of energetic moves to force his opponent into resignation.

The Ruy Lopez Anti-Marshall quickly turned into wild affair when white’s 16.Ne3 allowed black to complicate the matters with 17…Nxg2.

Black sacrificed a piece for two pawns and strong attack. But even the top chess engines disagreed whether black has a decisive touch.

Svidler could not see through the forest of complicated variations and eventually took a draw by perpetual check.

In the Catalan Opening white employed a relatively rare plan of 13.Rd1 combined with the development of knight to d2. The idea was to clamp down on the c5-square.

Black didn’t react accordingly and soon landed into big trouble. He tried to shake off white pressure by sacrificing a pawn, but to no avail, and soon even his knight got trapped.

Black employed an interesting transposition from the Semi-Slav Triangle into Stonewall Dutch with a knight on h6. This concept was examined in the theoretical works of GM Sherbakov.

Both players castled long but somehow black was more concrete in getting his kingside action going.

White simply couldn’t find the right plan and after the strong 24…g3 black seized the initiative.

Kasimdzhanov tried to reduce the pressure by giving up an exchange, but Grischuk returned the favour for decisive break on the second rank. White resigned on 33rd move.

Andreikin defended with the Slav and Tomashevsky attempted to play the dangerous Krause Attack 6.Ne5.

White didn’t mind losing a tempo to provoke the weakening 15…g5. Later he won the poor pawn and continued to harass the black king.

Shortly before the time control black fell under heavy attack and lost three pawns. On move 41 he realised the position was hopeless and congratulated his compatriot.