Fabiano Caruana’s impressive run has been put to a halt in round 7 of the FIDE Grand Prix in Baku when he was defeated by the tail-ender Dmitry Andreikin. This was Caruana’s first loss since the Chess Olympiad in Tromso.

Boris Gelfand joined the Italian on the shared first place with 4,5 points each after a draw against Rustam Kasimdzhanov. 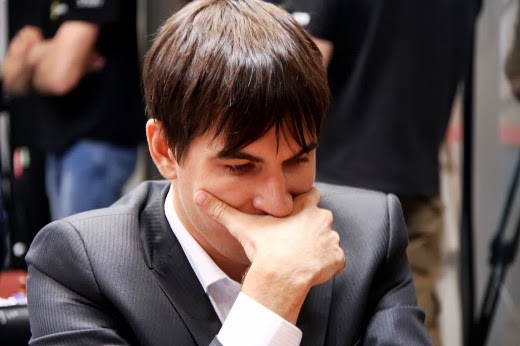 In the Moscow Sicilian white retreated his bishop to d3, in a maneuver that became popular recently. Grischuk already faced this plan, in a blitz game last month against Karjakin, and was obviously well prepared.

11.e5 was novelty, but it allowed black to double white’s f-pawns and anchor the knight on dominant central square.

White relied on a quick action against the black king, but black pieces were placed well and Svidler decided to take the perpetual check before it was too late.

After the game Gelfand approached Svidler and jokingly advised “you should develop all your pieces before embarking on such action”.

Grischuk said he is currently reading “And Quiet Flows the Don”, the 4-volume masterpiece of the Russian literature by Mikhail Sholokhov, adding that it is a very difficult book.

Against the Slav defence, Mamedyarov answered in “Catalan fashion”, with 4.g3. He is not a stranger to this development, having already played it against Nakamura in Gashimov Memorial earlier this year.

Tomashevsky deviated from that game, seeking an early clarification in the center with 6…dxc4.

With the compromised pawn structures on the kingside, both players decided to castle long.

White tried to expand in the center and his three pawns were imposing, but at the same time fragile without the base support.

Black was in position to get something going with 30…Qb4, but he wanted to be safe and repeated the moves for a draw.

Another game with the topical 3.f3 against the Gruenfeld Indian defence. Dominguez challenged white’s advantage in the center, while Radjabov responded by opening up the h-file.

Naturally, white castled long and tried to advance the passed d-pawn. Black was occupied with the opening of the powerful bishop’s diagonal.

After the inferior 22.Nd5, black was able to transfer his rook to a4 and place the white king into danger. Radjabov then reacted properly and Dominguez could not find the decisive blow, instead settling for a draw with perpetual check.

Later at the press conference both players said that it was fun to play this game, with many exciting lines to be considered.

Nakamura, always enterprising in the opening, started the game with Veresov Attack. Karjakin, in his turn, played a novelty as early as on move 5…c4.

With the opposite castles on the board, black got better from the opening by snatching the stranded pawn on c5.

Nakamura tried to mount an attack against the enemy king, but to no avail, and black succeeded in trading the queens to reach better ending.

Karjakin’s technique was impeccable and he delivered full point around the second time control.

It was a Queen’s Gambit Declined where Gelfand performed his trademarked positional squeeze. White was always just slightly better and it was not easy for black to come up with counterplay.

Finally, Kasimdzhanov lost patience and traded down to the rook ending where white was still the more active side.

But black defended tenaciously and finally pulled a miraculous save to reach a theoretical draw in the rook vs pawn endgame.

Caruana surprised his opponent and the entire internet audience by going for the Scandinavian defence.

White avoided the sharpest lines and preferred a positional build-up. In the transition between the opening and the middlegame something went wrong for black as he allowed his opponent to establish a passed pawn on d6.

Andreikin was inspired and never let the advantage go. He successfully reached an endgame with the extra pawn on the c-file.

Caruana fought valiantly but could not save the difficult position. He finally resigned on move 64.