Boris Gelfand and Fabiano Caruana finished joint winners of the Grand Prix in Baku after drawing their respective games in the final round.

Their nearest followers didn’t win either, and the only decisive match was Alexander Grischuk’s victory against Leinier Dominguez.

Caruana took the winner’s trophy on better tie-break (greater number of wins), but the Grand Prix points and money prizes are split equally. 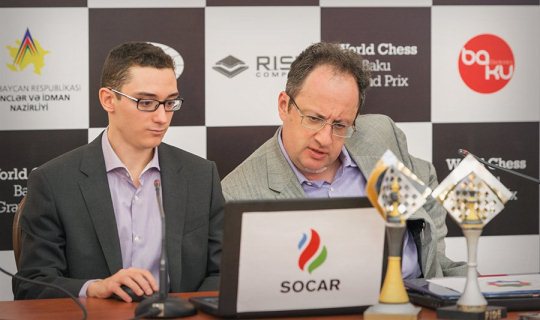 Radjabov lined-up fianchetto variation against the King’s Indian defence and it was not a surprise that Nakamura responded with his favourite Panno variation, which was also on Bobby Fischer’s repertoire.

Nakamura excels in these pawn structures with the knight anchored on d4. White found nothing better than to kill the tension in the center, but this procedure greatly simplified the position.

With many pieces traded and queenside cleared of pawns, the players have agreed to draw after the obligatory 30 moves of play.

A flashback to the previous decade when the English Attack in Sicilian Naidorf was all rage in tournament arenas.

Gelfand knew exactly what he was doing and Svidler never got anything going. The key defensive move 22…Qa7 forced white to exchange the queens. Draw was signed on move 31.

The game was short but extremely important theoretical duel in the Queen’s Gambit Accepted. Black held on the captured c4-pawn even at the cost of giving up the exchange.

Black had a quick development in exchange for material. It was very interesting to observe how both players ignored the doomed e4-pawn for several moves. Black took it only when it meant an attack on Qd2.

White decided to return the extra material in order to disrupt the coordination of opponent’s pieces.

The duel between two Russian players started as Queen’s Indian defence, but after several exchanges it reached a Hedgehog structure.

White forced exchange of the queens hoping to take advantage of the open d-file. But black was cautious to cover all possible entry points.

Seeing that there is no way through, white offered draw on move 33.

Tomashevsky repeated the line he previously used against Svidler, and once again captured the a4-pawn.

White maneuvered his knight to occupy the important f5-square, but it turned out that black can easily expel the intruders.

White then tried to break through the center, but an excellent reply in 27…g5 pushed him back.

After changing the hotels Grishuk has been playing in excellent shape throughout the second half of the tournament.

On the contrary, Dominguez collapsed near the end and signed four consecutive losses.

Their game saw Naidorf Sicilian with the Fischer variation 6.h3, which soon transposed to the position that resembled Scheveningen Keres Attack.

Instead of trying for the central break, black opted to trade the queens and remain solid. White maneuvered his knight to provoke g6 and set the stage for a break on the h-file.

Black missed the chance to grab the central e4-pawn, but in this sequence he would be required to calculate in advance many computer-like moves.

Instead the game continuation 27…gxh5 allowed white to dangerously threaten the opponent’s king. Another pair of mistakes took the black game beyond salvation.