The first two stages of the FIDE Grand Prix Series 2014-2015 were held in Baku, Azerbaijan and Tashkent, Uzbekistan.

Two more events will follow in Tbilisi, Georgia (February) and Khanty-Mansiysk, Russia (May).

Russian Grandmaster Dmitry Andreikin was the sole winner of the Tashkent Grand Prix.

After the two stages, Caruana is leading the standings with a total of 230 points. Second is Hikaru Nakamura with 207 points.

It is curious that Andreikin (3rd) and Gelfand (4th) had a pair of poor and exceptional results in a very short time-frame. 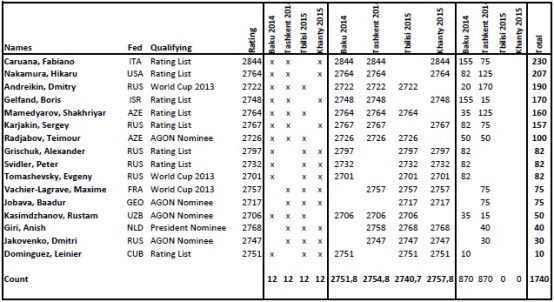