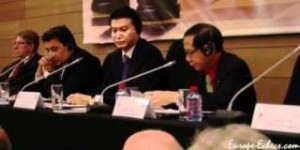 On 3rd July 2012, the Court of arbitration for sport (CAS) issued its decision in the arbitration opposing FIDE to the English Chess Federation and the Georgian Chess Federation (Appellants). These FIDE members were challenging the nomination by FIDE President Kirsan Ilyumzhinov and the confirmation and approval by the General Assembly of five Vice-Presidents in Khanty-Mansiysk in October 2010 arguing that only two Vice-Presidents could be nominated and confirmed. The Appellants filed a first appeal before FIDE Presidential Board and, against the latter’s refusal to consider a matter already decided by the General Assembly, before the CAS. FIDE immediately raised the objection that this appeal did not address the General Assembly’s confirmation/approval of the five Vice-Presidents. The Appellants tried to correct their mistake by filing a second appeal before CAS on the 29 March 2011, challenging this time the General Assembly’s decision of October 2011.

The CAS dismissed the two appeals. Its main rulings are as follows:

The Panel first decided that the dispute should be examined in light not only of Swiss law but also of the general principles of law (lex sportiva).

Second, the Panel considered that, contrary to what was alleged by the Appellants, the decision to appoint the five Vice-Presidents in Khanty-Mansiysk was a decision taken by FIDE General Assembly, and not a unilateral decision of FIDE President.

As a consequence, the CAS:

•    dismissed the first appeal filed by the Appellants because it wrongly challenged the Presidential Board’s “decision” instead of the General Assembly’s confirmation and approval of the five nominated Vice-Presidents;
•    held that the second appeal was inadmissible, having been brought six months after the General Assembly, i.e. later than the 21 day time limit set out in the CAS procedural rules.
In view of the above, the CAS ordered the Appellants English Chess Federation and Georgian Chess Federation to pay to FIDE CHF 75,000 for its legal fees and expenses as well as to reimburse to FIDE an amount of approximately CHF 50,000 corresponding to the advance of costs paid by FIDE to the CAS.

Despite this positive outcome, and as in the Karpov’s case lost by the same law firm and funder in summer 2010, FIDE deeply regrets the efforts and resources spent to have these two frivolous appeals dismissed and declared inadmissible.