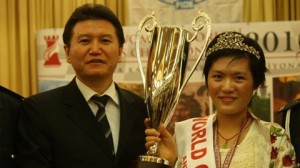 This is the fifth leg in the Women Grand Prix 2012-2013. The first leg in Rostov was won by Yifan Hou, she repeated her success in the second event in Shenzhen. Zhao Xue had no problems winning the Nalchik Grand Prix, while the fourth competition was a shared victory  by Yifan Hou and Humpy Koneru.

As the players come in for the fifth leg of the 2nd series of the Women’s Grand Prix in Jermuk, Armenia, we see the current Women World Champion Hou Yifan of China leading the overall standings with 420 points, followed closely by Ana Muzychuk of Slovenia with 375 points.

The World Champion will have the chance to extend the lead, as Muzychuk is participating currently in the ACP Classic and will not play in Jermuk.

The absence of Muzychuk makes Lahnno (260 points) and Zhao Xue (235 points) the closest competitors in the standings to Hou Yifan. Scroll down to see the full table of standings.

Games from Jermuk will be live on Chessdom.com with computer analysis.