The fourth round of the FIDE Women’s World Chess Championship started in SCC Galactica (Sochi, Krasnaya Polyana) on March 26.

They are to play short two-game matches with the following time control: 90 minutes for 40 moves, then 30 minutes for the rest of the game, plus 30 bonus seconds after each move. If the match is tied 1-1, it is continued on the tie-break with quicker time controls. 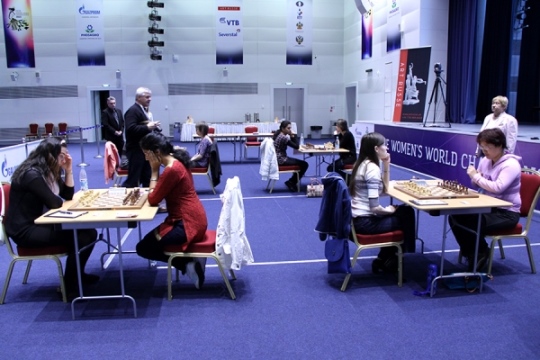 Arabidze and Dronavalli were first to finish their game. The Georgian, playing White, employed an aggressive setup in the Queen’s Gambit Declined and obtained a promising position with attacking chances. Harika decided to test the ambition and fighting spirit of her opponent by offering a draw after the move 15. After some thought Arabidze accepted the offer. 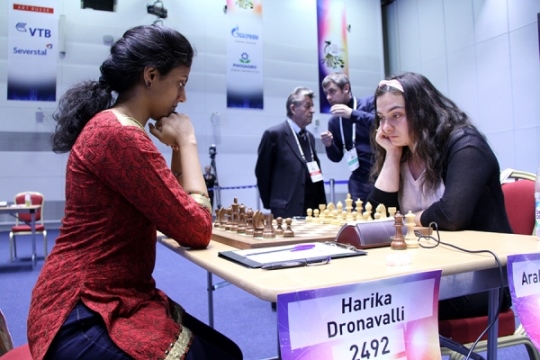 Mariya Muzychuk defeated the highest rated player of the tournament Humpy Koneru in a spectacular fashion. Prior to this game Koneru won six games out of six. Today she played Black, equalized rather easily and soon seized the initiative on the queenside. She then managed to win a pawn, but Muzychuk in turn created some threats to the black king. Humpy carelessly moved her knight away from the action, and then missed a powerful tactical blow. Mariya carried out a swift attack and earned a big victory. 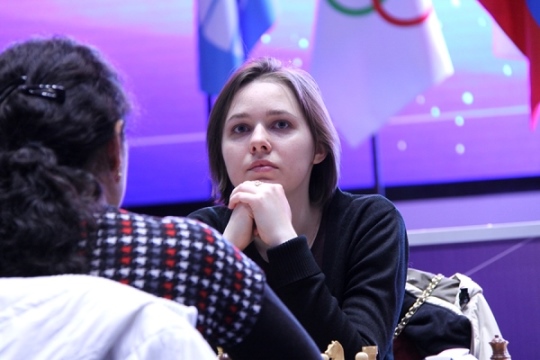 Anna Muzychuk, playing Black against Pia Cramling, patiently defended a slightly worse position with an isolated pawn. On the move 21 she offered a pawn sacrifice, aiming at pieces activity. Cramling declined the offer, but missed a stronger reply that could create Black serious problems. After the move in the game Muzychuk got sufficient counterplay; the position became balanced, and soon the players agreed to a draw.

The game between Natalia Pogonina and Zhao Xue was the longest of the day. The position after the opening was about even, but White overestimated her chances, aiming at the kingside attack. After Black’s central punch Pogonina had to switch to defending. She did not defend perfectly – first White lost a pawn and then traded the rooks, transposing to an opposite-colored bishops ending that turned out won for Black. Zhao Xue calmly proceeded to winning the game. 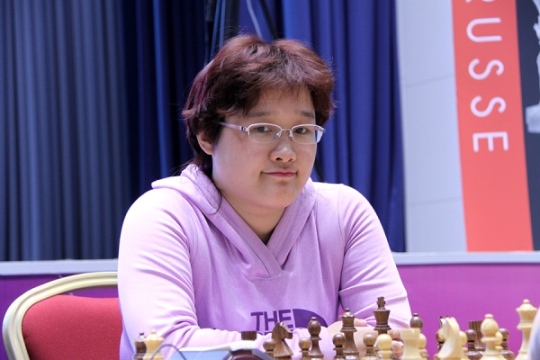 The return games are played on March 27. We will see the following match-ups: Koneru-M.Muzychuk, Dronavalli-Arabidze, Zhao Xue-Pogonina, and A.Muzychuk-Cramling. All games start at 3 pm Moscow time.