Mariya Muzychuk (Ukraine) and Natalia Pogonina (Russia) are competing for the chess crown in a 4-game match with classical time control (90 minutes for 40 moves, then 30 minutes for the rest of the game, with 30 seconds added after each move).

If the match ends in a tie, the winner will be determined on tie-break on April 6. 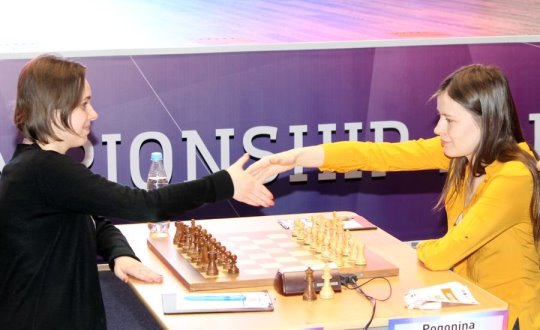 Pogonina had White in the first game. A fashionable line of the Meran variation arose, which leads to a calm in appearance but actually highly tense game. Muzychuk showed an interesting novelty, forcing her opponent to solve new problems at the board.

Pogonina found a logical way of regrouping her pieces and created certain pressure. On the move 26 Muzychuk made a serious mistake, allowing White to get a significant advantage. However, Natalia sent her knight to the wrong route, and Black equalized soon. After several exchanges the players agreed to a draw on the move 40. 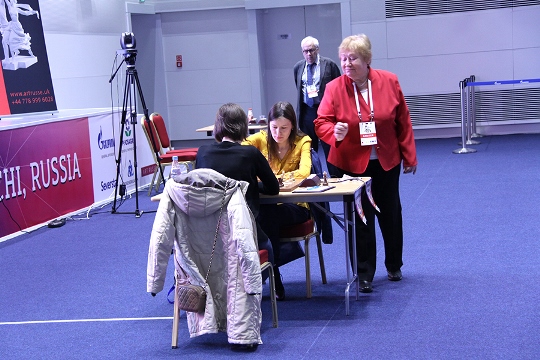 The second game is played on April 3rd at 3pm Moscow time. Mariya Muzychuk has White. 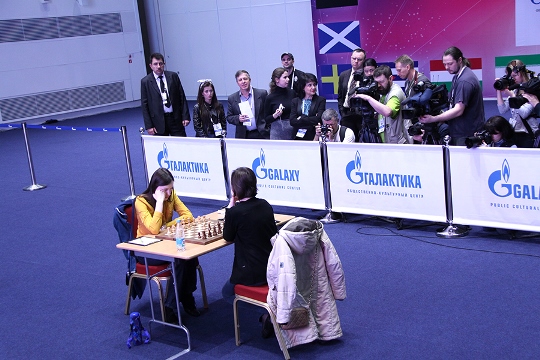 A joint press-conference by Natalia Pogonina and Mariya Muzychuk:

Anastasia Karlovich: My first question is about the atmosphere: were your comfortable playing in an empty hall?

Mariya Muzychuk: Yes, it felt normal, everything went as usual. Nothing has chanced.

Natalia Pogonina: It was unusual in the beginning – too much attention, too many cameras. In ten minutes it went back to normal. 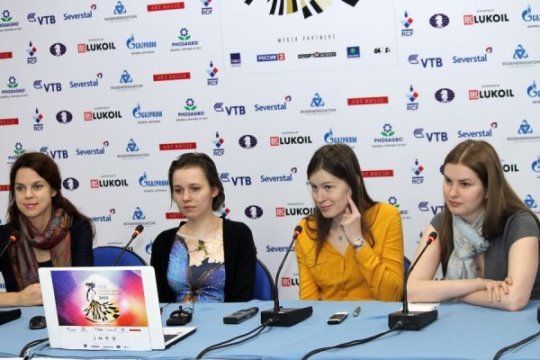 AK: Speaking of the game, were you satisfied with the outcome of the opening?

NP: I was generally satisfied. Don’t know what else can I tell, bearing in mind that later I will play White again.

MM: To be honest, I did not expect 20.Be3. Of course I repeated everything during my preparation, but there were so many variations, they all got mixed, and I could not recall the exact response.

AK: I am interested about the position after 16…Be6. Could White take on f6 and double black pawns?

MM: As far as I know, this move is not dangerous for Black, so I was not worried about it.

NP: I did not see any good way of arranging my pieces after that move. The bishop on f3 is blocked by my pawn, and I have some weaknesses on the dark squares. 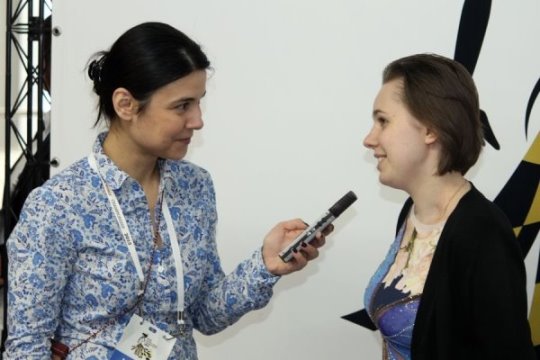 AK: What were the critical moments of the game?

NP: I was told I could play 27.Nd4 instead of 27.Nf4. I saw that move but evaluated the resulting position incorrectly.

MM: I was short on time. After 27.Nd4 I planned to play 27…Qd7, but cannot say I studied it deeply, because it was unclear what move Natalia chooses. My idea was to carry out …Bb6 and …с5.

AK: At what point Black equalized the game?

NP: I agree, there is nothing White can do there. 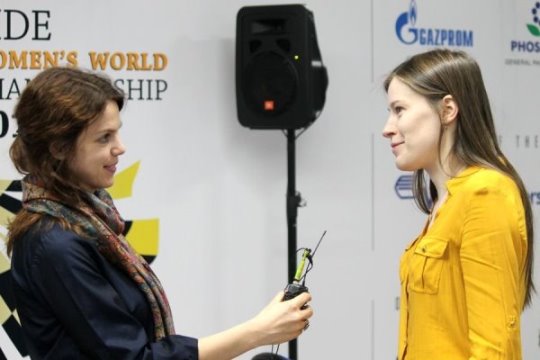 Kirillos Zangalis: For both of you this is a first match of such importance in your career. Do you feel any extra pressure or you treat every game like a regular game in a regular tournament?

MM: Of course the pressure is very high, but I wasn’t nervous too much today, don’t know how to explain it.

NP: I got focused on the game rather quickly. In the beginning it was kind of stressful, but stress went by as soon as I concentrated on the game. I did not think that I was playing a World Championship match.

Goran Urosevic: Natalia, you won many medals with the Russian team. Is there a difference between working with many coaches during the team events and playing here, being assisted by only one coach?

NP: I can only note that I know Pavel Vladimirovich Lobach, who helps me here, since 1998. We work together for a very long time, we are a very good team, and I feel very comfortable.

AK: Mariya, do you know anything about coverage of our championship in Ukrainian media? Did anybody try to contact you?

MM: I saw some information on the net and I know there are many articles about the championship. As far as I know, some people tried to contact me, but right now I want to concentrate on chess, and my sister takes care of everything else including contacts with media.

AK: So Anna in fact works as your manager here, right?