Following the games with the classical time control, the third day of the FIDE Women’s World Championship (Sochi, Krasnaya Polyana) was reserved for the tie-breaks with rapid and blitz games.

As many as 11 pairs were to settle the score in this format. 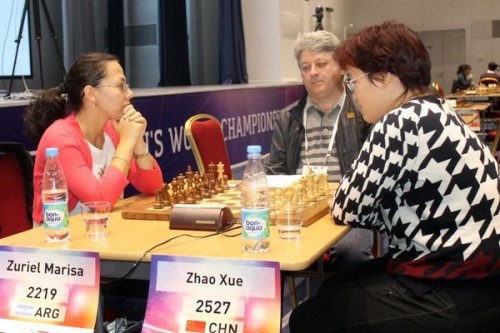 Marisa Zuriel has put up a heroic resistance against the overwhelming elo-favourite Zhao Xue, but after 1-1 in classical, she lost 2-0 in rapid games.

It is curious that the two already met in an earlier World Championship, when Zhao neatly won 2-0 in the first round. Considering that this time she won one game, the enthusiastic Zuriel proudly claimed that “Sochi championship is the most successful for her so far.”

Salome Melia also made a straightforward 2-0 win against Irene Kharisma Sukandar, which was slightly surprising considering how closely contested were the classical games. But the Georgian revealed that she changed the strategy and decided to be less hesitant and move faster. 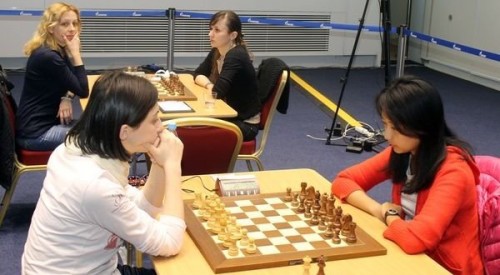 Marya Muzychuk started with a win against Yuan Yuanling, and then played a safe draw to confirm the next round qualification.

The Chinese Shen Yang and Huang Qian eliminated the Russian Alina Kashlinskaya and Baira Kovanova, respectively, by 1,5-0,5 in rapid.

The biggest shock was the terrible blunder of Deimante Daulyte. The Lithuanian won the first rapid game against Monika Socko, nearly brought the second one home, but instead of delivering checkmate in one, she blundered a whole queen! The point is that Daulyte would have qualified even with a draw, she “saw” a perpetual and went for it. She could not recover from the impact and easily lost the following two games. 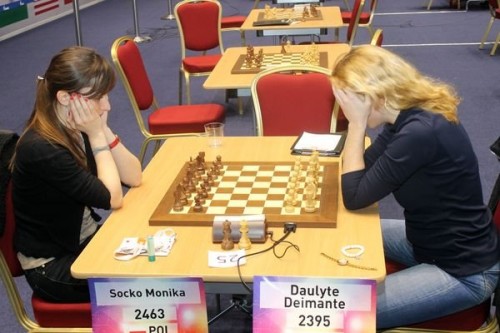 Carolina Lujan will rue the missed chances in this segment, as she misplayed the promising position with black, and then blundered huge advantage away with white. The two-times World Championship finalist Alisa Galliamova goes to the second round. 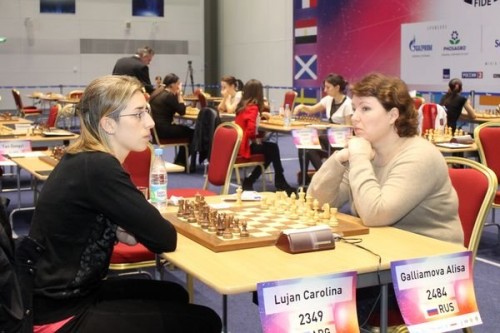 Two closest matches advanced to blitz games: Aleksandra Goryachkina (Russia) vs Lilit Mkrtchian (Armenia) and Mary Ann Gomes (India) vs Tatiana Kosintseva (Russia). Their blitz matches were also tied 1-1, and in both of them the Russians were fighting back after lost their respective first games.

Thus in both matches the spectators witnessed the ultimate showdown – a so-called Armageddon. 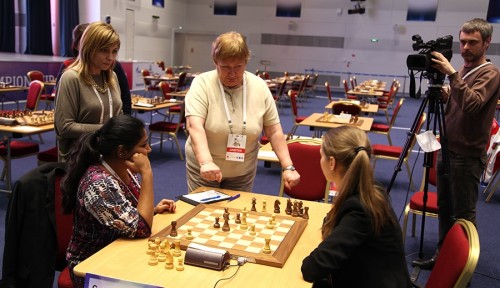 Goryachkina and Gomes won the drawing of lots and both picked White. Goryachkina obtained an advantage in the opening, piled up the pressure and won convincingly.

Kosintseva got a very good position as Black, but then either blundered or unsuccessfully sacrificed a piece, not getting much of a compensation for the lost material. However, the Russian kept fighting as both players were in time trouble and there were no increments before move 60, eventually wining on time in a totally hopeless position. 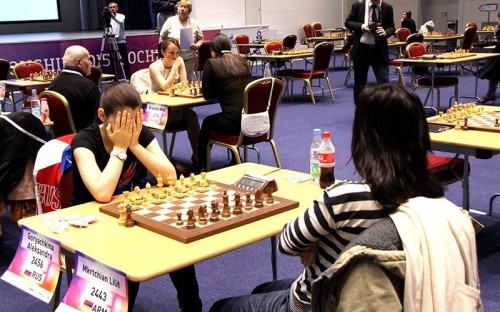 Aleksandra Goryachkina said: “Another lucky moment occurred during the drawing of lots in the Armageddon. My opponent had to choose the color, and she took Black. I had Black once in such situation, and it is very unpleasant, I tell you. White rules!”

Tatiana Kosintseva thinks different: “The final game, Armageddon, is like a lottery. The opponent picked White. I think playing White is harder, as she must play for a win only. My opponent took a lot of time in the opening, and soon we were even on the clock. In the forthcoming struggle I made a couple of serious blunders and ended up in a lost position. However, Mary Ann kept spending too much time on her moves, and one must not neglect time when playing without an increment. You know what happened next…”

The second round begins on March 20 at 3 pm Moscow time.