32 participants of the FIDE Women’s World Chess Championship returned today to the SCC Galactica (Sochi, Krasnaya Polyana) to play the first games of the second round.

In the Russian clash between Valentina Gunina and Olga Girya a quiet opening turned into wild complications after White initiated a risky kingside expansion. Soon Gunina sacrificed a piece, playing in style of Mikhail Tal – her sacrifice might have been unsound, but was very enterprising and led to a very sharp game. Girya did not find the correct response, and Gunina developed a winning attack. 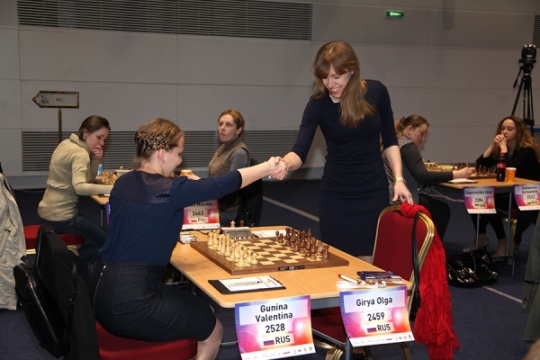 White also won in the second Russian derby – Alisa Galliamova vs. Tatiana Kosintseva. Galliamova got a small but lasting advantage in the opening, creating pressure against Black’s weak pawns. Kosintseva replied with a pawn sacrifice, aiming at a rook ending with good drawing chances. However, Galliamova countered her plan, kept an extra pawn and carefully converted this advantage into a win.

The ex-World Champion Alexandra Kosteniuk (Russia) defeated Shen Yang (China) with Black pieces. In the middlegame Kosteniuk found a great knight move – that was probably the most beautiful move of the day! 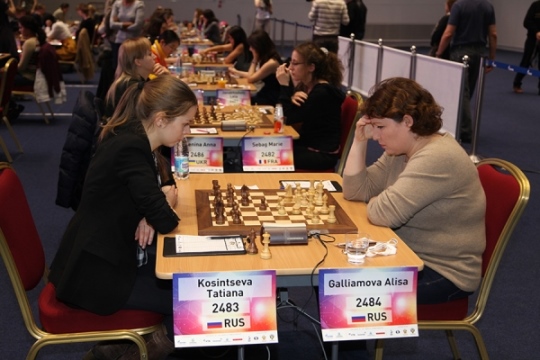 The longest game of the day was Lei Tingjie (China) – Humpy Koneru (India): it took six hours for the rating favorite to finally break the resistance of the young Chinese opponent.

Other games ended peacefully – an unusually high draw percentage for such tournament stage! 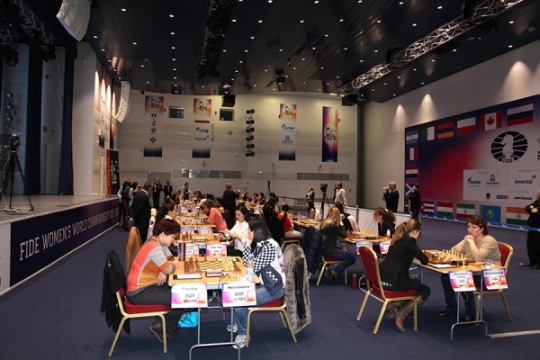 The second games of the second round will be played on Saturday, March 21, starting at 3 pm Moscow time.

Online broadcasting of the games with video is available in two languages (Russian and English) on the official site of the championship (http://sochi2015.fide.com) and the Russian Chess Federation website (http://ruchess.ru/).