The tie-breaks of the FIDE Women’s World Chess Championship were played in SCC Galactica (Sochi, Krasnaya Polyana) on March 28. Six players returned to the venue to determine the semifinalists in rapid and blitz games.

Natalia Pogonina (Russia) once again used the Benko gambit against Zhao Xue (China). Yesterday this opening allowed her to come back after the first game loss, today it gave her a comfortable lead on tie-break.

Zhao Xue did not prepare any improvement, and Black got a good game. In the subsequent maneuvering struggle White played imprecisely. Black pieces broke into the enemy camp, and Pogonina won a piece with a little combination, securing the match lead. 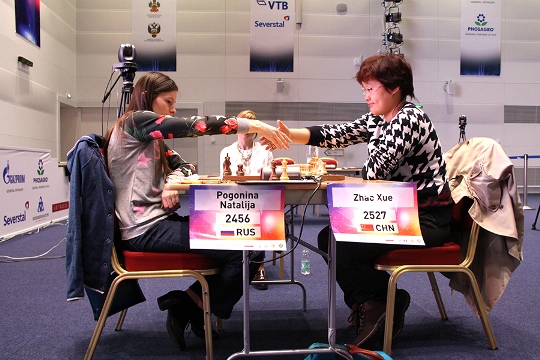 In the second game Zhao Xue went for a very rare and provocative opening and managed to initiate a complicated and double-edged game. In the middlegame White seemed in danger, but Black hesitated too much, allowing her opponent to launch the decisive counterattack. Pogonina won a pawn and could collect another one, but made a practical decision to force a draw by perpetual, securing her seat in the Semifinals.

Both games between Mariya Muzychuk (Ukraine) and Humpy Koneru (India) followed the same plot. Koneru outplayed her opponent in the middlegame, but later in the mutual time trouble the Ukrainian used tactical means to completely change the course of the game.

The first game was drawn, and in the second one Koneru got a winning advantage, but blundered a powerful tactical shot and had to resign. Muzychuk won the match 1.5-0.5 and advanced to the Semifinals. 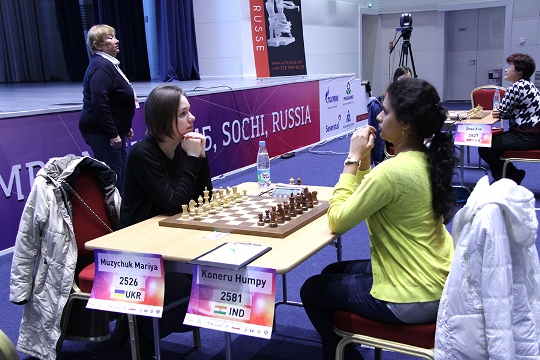 The match between Pia Cramling (Sweden) and Anna Muzychuk (Ukraine) extended to 10-minute games. In rapid games the players exchanged blows, both winning with Black pieces – Cramling won the first game, then Muzychuk made a comeback.

Then Cramling won the first 10-minute game and made a draw from the position of strength in the second one, rather unexpectedly eliminating the elder Muzychuk sister from the championship. Curiously, rating favorites went down in all three games of the day. 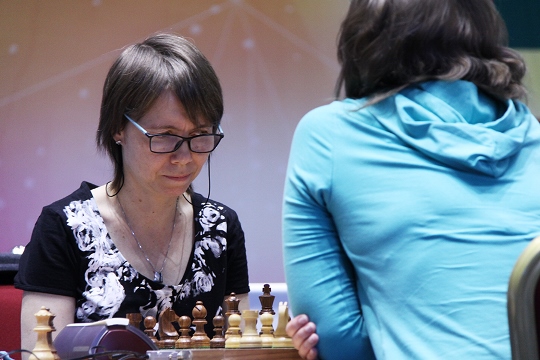 As usual, the matches consist of two games with 90 minutes per 40 moves and 30 minutes for the rest of the game, with 30 seconds added after each move. If the score after two games remains equal, the match is continued on the tie-break.