The third day of play at the FIDE Women’s World Chess Championship is over and all the results of the first round are in. After the regular time control 21 matches out of 32 had been decided. The remaining 11 matches continued on Monday with quick-play tiebreaks.

Nine players were eliminated after two rapid games. Some favorites won their matches but there were also some surprises. Harika Dronavalli, Zhao Xue, Sheng Yang, Guramishvili Sopiko, Huang Qian, Salome Melia, Olga Zimina, Anastasia Savina, Nataliya Buksa all went through to the next round.

A few of the rating favorites, including Hoang Thanh Trang, Monica Socko, Ekaterina Atalik, Bela Khotenashvili were knocked out of the World Championship at this stage. 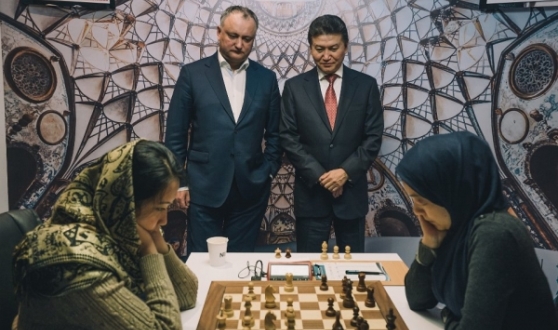 Two rapid matches Dzagnidze-Khaled and Bodnaruk-Hejazipour were tied so the players continued their battles at the 10 min + 10 sec time control. One of the top players of the tournament Nana Dzagnidze found her play and was successful at this stage. She won both games and eliminated her opponent.

The last match between the Russian Anastasia Bodnaruk and Iranian Mitra Hejazipour was not decided in blitz and the players reached Armageddon game.

During the entire match not even one game was drawn and each time Anastasia Bodnaruk had to win the second game to equalize the score. Mitra Hejazipour displayed a great fighting spirit but in the last battle of chess strength and nerves the Russian player came out on the top.

The second round of the FIDE Women’s World Championship starts at 3 p.m. local time on 14th of February. 32 participants will continue playing but as before only half of them will advance to the next stage.