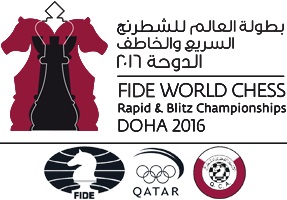 The 2016 FIDE World Rapid and Blitz Championships (Open and Women) will take place in Doha, Qatar, from 25th of December (arrival) to 31st of December (departure).

The events will be both Swiss pairings tournaments and will be held over two days for Blitz and three days for Rapid. The Blitz will have twenty one (21) rounds in open championship and seventeen (17) rounds in women’s championship, with a single game for each round, Swiss event.

The Rapid will be fifteen (15) rounds for Open and twelve (12) rounds for Women’s championship, with a single game for each round, Swiss event.

The World Rapid and Blitz Chess Championships are organized by the FIDE, QATAR OLYMPIC COMMITTEE and QATAR CHESS ASSOCIATION.

In recent years, Qatar has proved an exceptional ability and outstanding facilities to host hundreds of international and regional sports events. In the coming few years, Qatar will be hosting many world class events along with the UCI RWC 2016; such as World Bowling Championships 2016, World Artistic Gymnastics Championships 2018, Athletics World Championships 2019, and FIFA World Cup 2022.

Friendly Blitz Tournament in Lviv
Lviv Chess Federation with GM Adrian Mikhalchishin and Bank of Lviv with its Director GM Margeir Petursson are putting up lots of effort to ...

CHESSka defends the world champion title among chess robots
Two unique chess matches involving robots took place on Saturday 19th of May in Moscow, on Strastniy Boulevard. In a special pavilion built for this ...