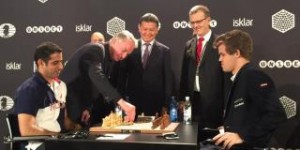 The 2015 World Rapid Chess Championship continued today at the Bolle Meierei in Berlin, Germany, with rounds 6-10 in schedule.

The defending champion Magnus Carlsen and GM Sergei Zhigalko from Belarus maintained the pace from the first day, scoring 4,0/5 points each, to emerge co-leaders on 8,0 points.

Carlsen started the day by saving a completely lost position against Daniil Dubov. This lifted his spirits and he went on to defeat Grandmasters Wojtaszek, Guseinov and Radjabov, conceding only one draw to Ian Nepomniachtchi.

Zhigalko in his turn scored victories against Gelfand, Bocharov and Nepomniachtchi, while splitting the points with Leko and Kryvoruchko. In the next 11th round the two leaders are paired to play each other.

On the shared third place are Igor Kovalenko, Vladimir Kramnik and Vassily Ivanchuk with 7,5 points each.

The overnight leader and 2015 FIDE World Cup winner Sergey Karjakin slipped down in the standings after two losses and is now on 6,5 points.

The final and decisive 5 rounds are played on Monday from 14:00 local time.