The 24th FIDE World Senior Chess Championships are scheduled to take place from 23rd October to 5th November at the conference center of the 5-star hotel “Mediterranean Village” in Katerini, Greece.

The World Senior Chess Championships are open to all players, regardless of rating and title, who have reached the age of 50 and represent National Chess Federations which are members of FIDE. There is no limit in the number of participants per federation.

In each age category an Open and a Women’s competition is organized. 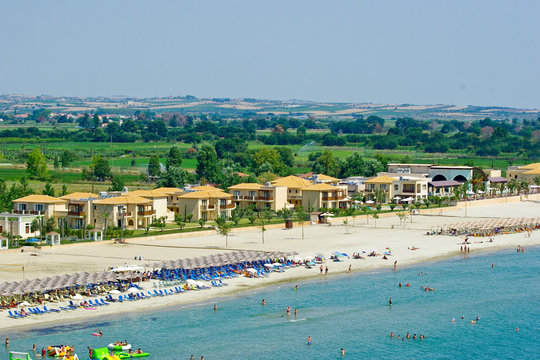 Players with a personal right, according to FIDE regulations, will be accepted as guest players with free board and hotel accommodation.

The FIDE World Senior Chess Championships shall be played in 11 rounds following the Swiss System. Time control is 40 moves in 90 minutes and 30 minutes to the end of the game. Each player will also receive 30 seconds for each move played. Default time at the start of all rounds is 30 minutes.

The title of “International Grandmaster (GM)” will be awarded to the two winners of the 2014 FIDE World Senior Chess Championships 50+ and 65+ who will also receive trophies and gold medals.

The same applies for the respective Women titles if there is a separate event for Women with minimum 10 players from a minimum of 2 continents.

Total prize fund is 20.000 euros. Money prizes will be equally shared among players tied with the same score.