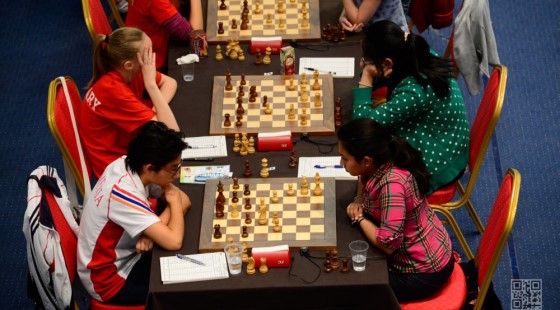 The FIDE World Youth & Cadets Championship 2015 continued with round 3 here in Porto Carras, Halkidiki. After multiple surprises and exciting games, leading groups are forming in each section.

Mosadeghpour Masoud, FM Stathopoulos Ioannis and GM Alekseenko Kirill are on the top of the Open U18 group. The top-seeded Vaibhav Suri is half a point behind.

In the Girls U16 the top seeds WIM Zhou Qiyu and WIM Dordzhieva Dinara are already full point behind the leading group.

In the U14 groups, both Open and Girls sections have exactly nine leaders each – all of them with perfect scores.

The U12, U10, and U8 sections have their particular charm, as games and results continue to be unpredictable. The desire and love for the chess game in these children is admirable, many games are played for more than five hours.