The championships will be held in 5***** “Sheraton Montevideo Hotel” (Víctor Soliño 349). 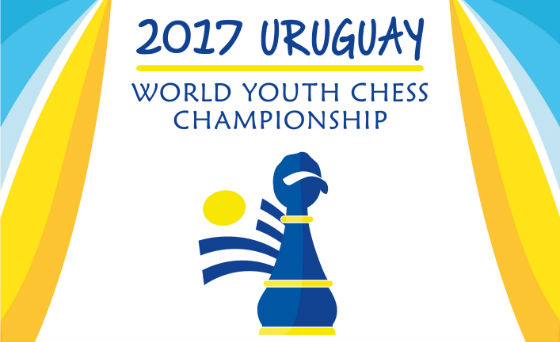 I. Invited people – Each National Federation has the right to send one (1) player in each category (under 14, 16, 18 years old, open and girls) who has not reached the age of 14, 16 or 18 before January 1st of the year 2017, total six (6) players.
If a participating Federation does not send a player in any age category, they cannot substitute this for another one.
Also one (1) Delegate (captain/trainer with a valid FIDE Trainer license) belonging to the national federation is invited by the Organizers.

II. Personal Right Players – Players who have the right to participate are:
a. The top 3 players of the previous edition.
b. The Continental Youth Champions of the year preceding this edition.
These players may elect to play in the same age-category or a higher one if the age stipulation mentioned above is met.
Such players shall also be classified as INVITED PEOPLE and have to be registered by their national federation.

The deadline for the registration is July 16th, 2017. Until this date participating federations must submit the list of participants with all required data.

II. ORGANIZING FEE
-Every player (invited, additional or by personal right), every delegate and every accompanying person shall pay an Organizing fee of 100 Euros (or USD 106) until July 16th, 2017.
-This registration fee is compulsory and includes transportation from and to Carrasco International Airport, accreditation, identification, badges and organization costs.
-Only accredited participants will be allowed in the Tournament Hall and in any other official area. If the accreditation is lost, a fee of 20 dollars should be paid to get a new one.

III.LATE REGISTRATION, WITHDRAWAL OR NO SHOW
– Regulations for Competitions Art. 15.2, 15.3 and 15.4 will be applied in case of withdrawal or no show.
– A registration is considered complete when FIDE fee, Organizing fee and if necessary at least 50% of accommodation is paid. In case of late registration, the organization will decide if the player can be accepted and a fine could be charged.

The tournament format is 11-rounds Swiss and the rate of play will be in accordance with FIDE rules: 90 minutes for the first 40 moves followed by 30 minutes for the rest of the game with an addition of 30 seconds per move starting from move one.

The players who took the first three places in each event will be awarded with Gold, Silver and Bronze medals as well as Certificates. For the next seven places, medals and certificates will be awarded.

FIDE President in Dubai
In the Dubai Museum of History an agreement between FIDE, Asian Chess Federation and the Dubai Sports Council was signed on the subject of ...

Cooperation Program FIDE and Peace and Sport
FIDE - International Chess Federation’s Philosophy: Putting Chess at the service of Peace The sport of Chess has many intrinsic values that are very important ...